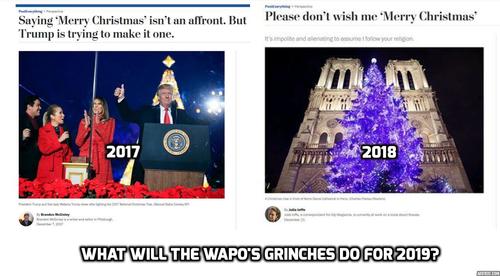 In 2017, Brandon McGinley wrote this in the Washington Post:

The elderly man who scanned my purchases at Target this week concluded our brief interaction with the valediction “Merry Christmas!” There was just a touch of mischief in his voice; he seemed to delight in saying the phrase, especially as an employee of a corporation known for its progressive politics.

It seems that President Trump would approve. He has alternately attracted scorn and approbation from the likely places for pointedly including the traditional greeting in public statements and encouraging others — especially retail workers — to do so as well. In fact, at an event in Utah, he recently declared that Christmas is “bigger and better than ever” on his watch.

On one hand, this attempt to politically capitalize on Christmas is simply part of the president’s cynical and ham-fisted pantomiming of Christian politics. But it also emerges from a view of the way personal interactions are supposed to work that Trump imports from his particular brand of business experience. If, as the president seems to think, nearly every interaction and relationship is defined by antagonistic negotiation, then sensitivity to the emotions and desires of others is at best superfluous and at worst a childish and counterproductive vice.

Saying ‘Merry Christmas’ isn’t an affront. But Trump is trying to make it one, December 7, 2017

This combines Trump-hate with the idea that it's normal, Christian Americans who have started the War On Christmas. But it does say that saying "Merry Christmas" isn't an affront. At the end of 2018, Russian-Jewish immigrant Julia Ioffe [Email her] declared, also in the Washington Post, that it is an affront: Please don’t wish me ‘Merry Christmas’ | It’s impolite and alienating to assume I follow your religion, December 21, 2018. (See more on ths from me, Steve Sailer, and Tom Piatak.)