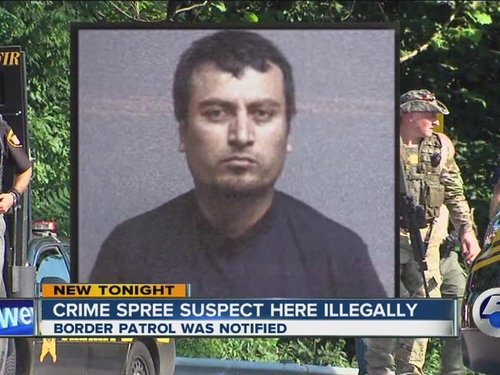 From: An Anonymous Cleveland Reader [Email him]

I see this story has finally made national news. It is a repeat of the Kate Steinle case in all of its essentials. Local police briefly detain an illegal alien. Border Patrol tells them to release him. Several weeks later he murders an American woman he first tried to rape, attempts to rape a teenage girl and then shoots another woman in the arm at a park.

PAINESVILLE, Ohio - The Lake County Sheriff's Department had contact with Juan Razo days before he became a suspect in a crime spree that left one woman dead and another in the hospital Monday afternoon.

According to a police report from July 7, a Lake County Sheriff's Deputy spotted a suspicious car and approached the driver, Razo.

Razo admitted to being in the U.S. illegally and deputies called the U.S. Border Patrol, the report states, but the agency decided not to respond to take Razo into custody.[More]

This deserves wide attention, especially with the first Republican debate scheduled in Cleveland on August 6. Perhaps VDARE.com can run something on it. Like the other incidents, it needs to be thrown in Jeb Bush's face.