An Illinois Reader Reports On The OTHER Darren Wilson 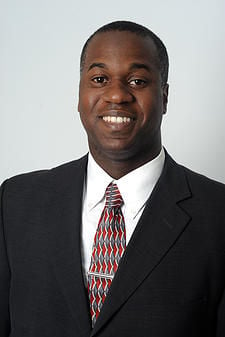 Two things struck me as funny right off the bat. Their slogan is "We Are The Conscience of the St. Louis Police Department". But  the real killer I saw was that the front page is all about assuring everyone that the "black" Darren Wilson who is the President of the Ethical Society of Police is not the murderous "white" Darren Wilson from Ferguson!

The front page letter is from "black" Darren Wilson himself; making things clear. The statement about the name similarity starts "The first thing we would like to assure the world is that this is a horrific coincidence." Yes, he said horrific! Then he goes on "May we assure the world this is not the President of the Ethical Society of Police...Who is African American" They made sure that people realize the only horrible race that stops people, even of their own race, from committing crime are horrible white people!

The Ethical Society of Police is also ticked off that St. Louis is 50% Black and 50% White yet the department is only 30% Black. Do you think if they reached 50% Black employment they would give up, or have to give up their Blacks ONLY club?

There's no way in Hell a whites only police group would last! Especially not after Eric "My People" Holder was done with them. Holder has now got people fired or suspended from Ferguson over internet jokes that are based on reality.

Maybe white Darren Wilson should post a letter saying "At least I'm not that guy."

James Fulford writes: Perhaps they could publish a joint letter. In the 1950s two English peers, Lord Russell of Liverpool and Bertrand Russell (The Right Honourable The Earl Russell) kept getting each others' mail. After a brief consultation, they published the following letter in the Times of London: 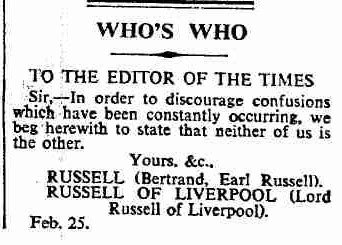