An Illinois Reader Reports On Hijabs In Chicago

From: Illinois Paleoconservative [Email him]

I'm writing in response to Steve Sailer's recent blog that ends with the question “Is the increase in hijabs in Chicago during the Presidency of Barack Hussein Obama more due to immigration or due to Muslims already here de-assimilating into Mecca-style apparel?” He also asks which is worse.

As a man born and raised in Chicago I can say it's definitely due to the increase in immigration! As we have seen Muslim immigration skyrocket since 9/11. As of 2000 there were fewer Muslim women around Chicago and those there stuck out due to their Muslim garb. After 2000 the increase in immigration of Muslims in the Chicago area has been extremely noticeable. [Muslims bypass Mormons as fastest-growing religion in Illinois, by Stacey Wescott, Chicago Tribune, May 2, 2012]. Many new burqa stores have gone up along with many mosques and so called "Muslim community centers".

One Muslim community center on the corner of Elston near Pulaski has a sign that says "No one is worthy of worship but Allah". They are even building mosques in places that are traditionally mostly Jewish, like Skokie. Is this out of spite? I'm not sure. 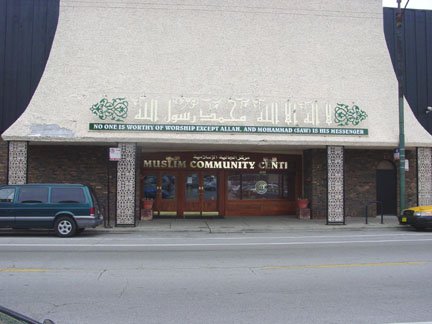 It is now very common in Chicago and directly attached suburbs to see women in burqas everywhere. They can be seen in everyday stores, driving poorly in the car next to you, and on main city roads in front of stores with Arabic titles.

These stores are increasingly popping up, many advertising halal food and Persian markets. The women are often seen walking around with many children in tow. I have never witnessed "Islamaphobic" remarks and many people seem to now just accept it as the norm.

I moved the hell out of Chicago in 2001 only to return for work and family. I have first hand seen the demographic shift. Groups of apartments that used to house poor Polish immigrants and non English speaking Mexicans are now filled with burqa wearing Muslim families. They do congregate in blocks!

As for Steve's question as to which is worse, more Muslim immigration or Muslims de-assimilating, I think any member of VDARE would agree it's the increase in immigration! Who cares what they wear if there are only a few of them?

But taking over whole neighborhoods would be a problem even if they wore normal clothing.