From: A Concerned Englishmen [Email him]

I am disgusted to see that my own country, Britain, is constantly late and waits  for extreme danger before it does anything to tackle extreme Islam in schools. It has just now just started to investigate one such school. This school in Dewsbury, Yorkshire called ‘The Islamic Tarbiyah Academy’ has just been investigated for “Promoting extremist Islam”. Extremist is an understatement!

This school has been promoting Sharia Law for years, with pamphlets used by its headmaster, one Mufti Zubair Dudha to suggest that Muslims should give up their lives for a world “according to Allah’s just order.” [ Exposed: UK School Promoting Extreme Islam ,By Gerard Tubb, SkyNews, March 31, 2016] 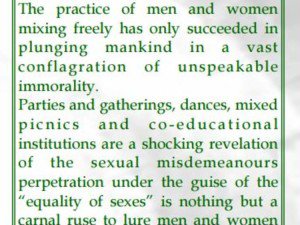 Dudha had also claimed in school newsletters that Muslims should not adopt British customs and values, that all mixed-sex institutions are evil, wanting to ban the watching of TV (as it indoctrinates the children away from Islam), and telling women not to go out to work.

What is quite disheartening is that Dewsbury Mosques and Muslim schools have not been investigated even though Dewsbury is the home to Britain's youngest suicide bomber, its youngest convicted terrorist, and one of the 7/7 bombers. The police, who don’t bother policing anymore in this country,  didn’t even accept that Dewsbury might have a problem in the Muslim community.

Schools in Britain,  however,  will bash any non-Muslim person, branding them "extremist" for ordinary political opinions. Just this past 30 days a school forced a school governor to resign because he was a member of the anti-mass immigration party “UKIP”. [Outrage after school governor FORCED to resign because he is a member of Ukip, By Paul Jeeves, Express.co.uk, November 13, 2014]

A school in the south of England also called the police on one of their own students for watching a video critical of Islam and going on UKIP website, treating him like he was a terrorist. [Hampshire school calls police after pupil looks at UKIP website, February 26, 2016]

Britain, it seems will regrettably have to face a Paris or Brussels scale terrorist attack before it comes to accept that it has a Muslim problem.