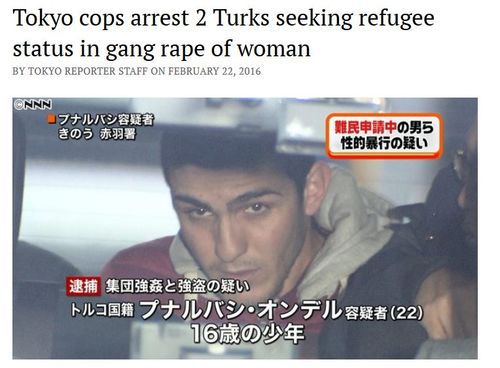 Re: Federale's blog post Japan Has Too Much Sense to Admit Syrian "Asylum Seekers"

From: A Berkeley  Reader [Email her]

As a footnote to Federale's VDARE.com March 29 piece on Japan's rejection of almost all Muslim asylum seekers, here is  an account of the arrest of two asylum-seeking Turks in Japan for rape and robbery. You can find several other links to this story via Google.

At approximately 12:30 a.m. on December 27 of last year, Onder Pinarbasi, 22, and a 16-year-old boy allegedly took the woman, aged in her 30s, to a public toilet near JR Akabane Station and sexually assaulted her. The suspects also stole 9,000 yen in cash from the victim.

Pinarbasi, who has been charged with rape and robbery, claims the boy committed both crimes. The boy admits to onlyl the robbery charge. “I did not force myself upon her,” he is quoted by police in denying the rape accusation, according to the Yomiuri Shimbun (Feb. 22).

The incident occurred after the suspects called out the woman, who was visibly drunk at the time, as she was walking home.

The suspects arrived in Japan last year. They applied for refugee status in August and October, telling the Immigration Bureau of Japan that they did not want to return to Turkey due to “problems that exist between relatives.”

While their applications were being examined, the suspects received a visa status granting “special permission to stay in Japan.”

The suspects became people of interest for the police after an examination of surveillance camera footage taken in the area.