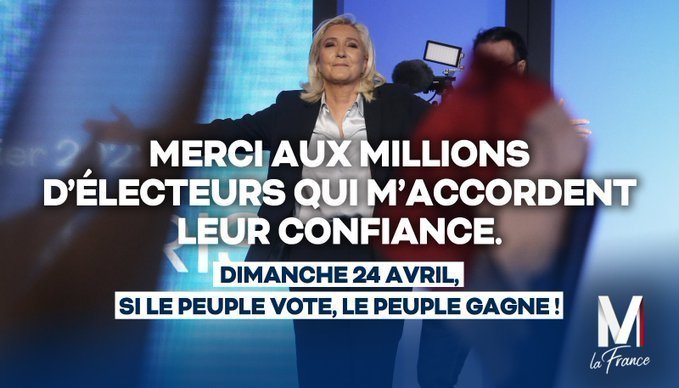 An Anonymous Reader Writes On Normie French, The Success Of Propaganda, And The "Le Pen Curse"

An Anonymous Reader [Email him]

If you haven't yet done so, I recommend you take a look at this interview between Richard Hanania and Philippe Lemoine, regarding the recent French election.

The Politics of Generation, Race, and Class in France
A conversation with Philippe Lemoine on the French election, low information voters, why Zemmour failed, and the "Le Pen curse."
Richard Hanania
April 25, 2022

I was particularly struck by this portion of the exchange:

Richard: So Le Pen is seen as the person of low class, racist, uneducated people.

Philippe: Exactly. And an extremist. Here’s something that happens all the time, an experience I’ve had several times, and that many people have talked about and they’ve had similar experiences. You talk, for instance, to an old person in France, a grandmother. You talk to her about immigration. She starts saying stuff that Le Pen would never say. And when I say never say, I don’t mean stuff she would never say publicly. I mean she doesn’t even think stuff that radical. They’re like a thousand times more racist than Le Pen is. They’re saying that stuff, “racist” is a misnomer here, but you know what I mean.

So they say that stuff and then you’re like, oh so you’re going to vote for Le Pen? And they look at you, genuinely horrified that you would suggest such a thing. Me? Voting for Le Pen? I will never do that. I’m not an extremist, only fascists vote for Le Pen. This is somebody who just explained to you that if she had her way, she’d send back all the immigrants and their descendants, if it doesn’t work we’ll have to kill some. I’m exaggerating, but not that much. So that’s what I mean when I say people vote primarily not based on ideology, but based on which kind of social groups, who as a person in a social group they identify with, and how they perceive that kind of person votes. They don’t perceive themselves as extremists, but they perceive the Le Pen vote as an extremist vote.

Richard: So the Le Pen name is just a poison brand. This was, I think, the promise the Right saw in Zemmour, and maybe the reason why Zemmour might have a better future in politics.