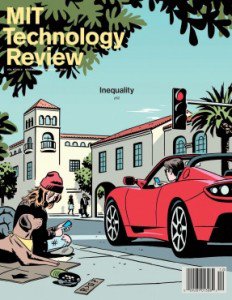 The recent issue of MIT Technology Review has a cover story about income and wealth inequality in the western world. The piece has a particular focus on California and Silicon Valley within the past 30 years. The author seems genuinely puzzled and floats several theories. Given that this is a journal of up and coming technologies, it's understandable the author doesn't stray far from this premise. [Technology and Inequality | The disparity between the rich and everyone else is larger than ever in the United States and increasing in much of Europe. Why? By David Rotman, October 21, 2014]

But what gets me is that there is not the slightest mention of immigration. Within the western world, California in particular has been the target of unending deluge of impoverished third world immigration, how could an such a society NOT be riven by huge gaps in income in wealth? Yet these egg-heads with their PHDs, white coats and slide rules (or 21st century equivalent) are totally oblivious to it. It's not even on their radar.

Ryan Kennedy (email him) has written us many letters and articles.He lives in Anchorage, Alaska.