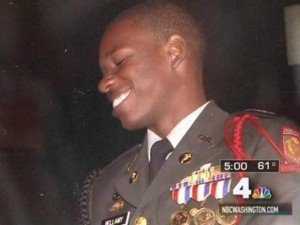 Re: James Fulford's blog post Black Student Beats White Teacher Bloody Over What He THOUGHT Was A Racial Remark

From Professor Of Mystery [Email him]

Here’s a detail–the High School in question, which is supposed to be a public “military academy” has approximately no white students

It looks like Forestville ROTC is quite literally a Killing Machine.

Just type in the school name and murder and you get:

Alleged killer to pregnant girlfriend: come to your senses "before it's too late" 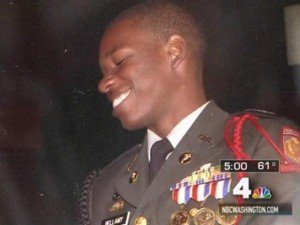 An Oxon Hill man has been sentenced to 30 years in jail for killing his pregnant girlfriend, whom he ran over with a car and left to die on the Forestville Military Academy's campus in May 2009.

Bernard Bellamy Jr., 21, [Right, in ROTC uniform] faced a first-degree murder charge for the slaying of Valicia Andrea Demery, 19, of District Heights. He pleaded guilty Friday to a lesser charge of second-degree murder, as part of a plea agreement.

Police said Bellamy, who was a student at West Virginia State University at the time, and Demery argued whether Demery should have an abortion. Bellamy sent Demery, who was four months pregnant, threatening text messages the night before her death, according to charging documents from Prince George's County District Court.

A jogger found Demery's body around 6:30 a.m. May 10, 2009, on the track at the Forestville school where they had both graduated. She had been run over and dragged underneath a car, charging documents state.[More]

I'd say that the teacher was crazy for staying in such a psychotic student body. It's even sadder to see that such homicidal wrecks are groomed to believe that they are officer material.