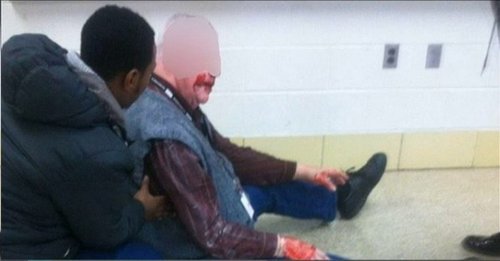 This Washington Post story says nothing about race, but that's what the story is about—the picture above is from an NBC video,in a story headed Witnesses: Prince George's County Teacher Punched by Student Over Racially Insensitive Comment, By Tracee Wilkins, February 3, 2015.

But that's not how the story reads in the Washington Post:

A Forestville High School teacher was injured last week when a student assaulted him in class, school system officials said.

The classroom incident began Jan. 29 with “a misinterpretation of a comment” and has prompted school administrators and security staff to investigate the matter, Prince George’s County Public Schools authorities said in a prepared statement.

The teacher was treated for minor injuries and school officials did not further elaborate on the comment they say prompted the incident.

In a letter to parents, Forestville Principal Nathaniel Laney assured parents that “all involved in the incident will be subject to the appropriate consequences.”

“Furthermore, this incident is not indicative of the way we conduct ourselves at Forestville High School,” Laney’s letter continued. “As Mighty Knights, all of us are expected to carry ourselves with respect, responsibility and integrity each and every day.”

Laney’s letter urged parents to talk to their children about “civil discussion and behavior,” confronting conflict without violence and exercising caution in what they post on social media. The incident was first reported by WRC-TV (Channel 4).
“While there are many benefits to social media, there are also many risks that can have a negative impact on your child’s reputation now and in the future,” Laney said.

Sherrie A. Johnson, a spokeswoman for the school system, said officials could not detail what disciplinary actions administrators took in the matter, citing confidentiality for both the student and teacher involved.

As of Tuesday, the teacher had not yet returned to work, Johnson said. Lynh Bui is a Prince George's County public safety reporter and former Montgomery County education reporter.

Here's a detail—the High School in question, which is supposed to be a public "military academy" has approximately no white students. 92% black, 6% Hispanic, other two percent unknown, or rounding errors, according to GreatSchools.net.