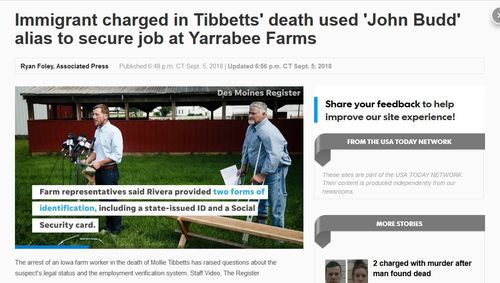 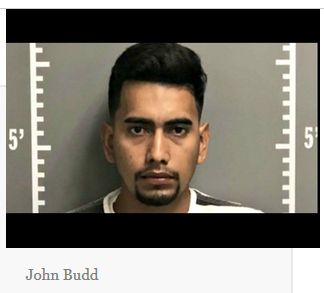 The Mexican man charged with abducting and killing an Iowa college student was known for years on the dairy farm where he worked by another name: John Budd.

Isn’t “John Budd” a Keanu Reeves movie in which the bad guys kill his beloved potted dope plant by overwatering it, so he takes bloody vengeance?

The alias has emerged as Cristhian Bahena Rivera’s employer, a dairy farm operation owned by a prominent Republican family, faces questions over whether its managers were aware of any warning signs that he may have been in the country illegally.

The name under which Rivera was hired and paid for the last four years was confirmed by three people with knowledge of his employment history, according to the Associated Press. … One of the people said Rivera’s work identity as John Budd appears in official government records.

… Lori Chesser, an immigration employment lawyer advising the farm, said that companies cannot discriminate against workers based on how they look or how their names sound.

Farm officials have said Bahena Rivera presented an out-of-state photo ID and a Social Security number when he was hired in 2014, and they believed he was the person depicted in those documents until his arrest last month.

The farm followed legal requirements to examine the documents and determined “that they appeared genuine on their face and related to the person presenting them,” Chesser said. “Questioning a name or other characteristic would violate the anti-discrimination provisions of the law.” …

A commenter has found a photo of an actual guy named John Budd, a high ranking executive at Sonic Burger headquarters. Apparently, though, noticing that sex murderer “John Budd” doesn’t look much like a real John Budd is against the law.

The farm did not use the government’s voluntary E-Verify system, which allows companies to verify the identity and immigration status of job applicants. …

It’s unclear whether E-Verify would have detected any red flags with Bahena Rivera’s claimed identity, but the farm has said it used a different government service to confirm that the name and Social Security number matched. …

Employers typically do not face legal consequences for hiring a worker under false documents as long as they were not involved in obtaining them and had no other obvious reason to suspect they are fraudulent, said Bob Teig, a retired federal prosecutor in Iowa.

“Absent unusual circumstances, it would be difficult to show they knew any more than what they were told,” Teig said, adding that it would be “pretty racist” to assume a John Budd could not be Hispanic.

Here’s another John Budd, who works in the packaging and containers field in the Denver area.

Whether anyone else knew Bahena Rivera as John Budd is unclear. The 24-year-old had a Facebook page under his real name, and his account listed many friends from the central Iowa area. He has a girlfriend and a young daughter, his former attorney has said.

… Erica Johnson, an advocate who directs the American Friends Service Committee’s immigration program in Iowa, said the case highlights the “precarious position” that immigrant workers and their employers face.

“We have an immigration system that doesn’t account for the labor needs or economic realities of Iowa businesses and farms,” she said. “So what do you do? Do you rightly not racially profile people and take the information they give you because you need workers?”

Big business and big liberals all agree: you can’t bake a diverse omelet without smashing a few 20-year-old girls’ skulls. What’s a little sex murder versus the moral atrocity that would be skepticism about whether Cristhian Bahena Rivera’s real name is actually John Budd?