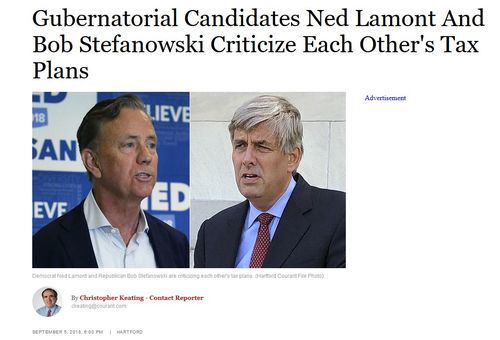 From: A Connecticut Reader [Email him]

Ned Lamont will be the Democratic candidate for governor of Connecticut, and years ago when I asked him a question on immigration, he surprisingly gave exactly the right answer.

The event was a little fundraiser at a neighbor's house. Lamont was already known for running against Joe Lieberman for the Senate in 2006, opposing the continued war in Iraq, and this was in 2010 when he was going for governor. In the little room of supporters he probably wasn't ready for my pointed question, and probably thought the question was coming from a liberal, so he answered with a furrowed brow.

My long-winded question was this: "Politicians pretend they can affect a lot of things, but there is one issue where they pretend they can't do anything, though they really can, and that is illegal immigration. You can say that we have a responsibility give an education to our own citizens who aren't well off, or you can say we have some responsibility to educate half of Mexico's kids, but you can't say both and mean it."

I don't recall how he began, but he ended up by saying we have to do interior enforcement, including workplace enforcement, which is right, though I would add that renting or selling living space to illegal aliens should be punished as well. The whole illegal population would be gone in two months if we put the screws to their citizen enablers. I still want a wall as a statement of principle, but that's not how they keep banks safe. They don't stop anybody from walking into a bank, but they stop robberies by coming after you later, whereas the states now say to foreigners "get past the federal border, and we'll give you free stuff."

Back to Lamont, I won't draw too many conclusions from this, except that he is at least capable of understanding the issue, and second that when candidates just start free-associating they get closer to the truth than when using prepared phrases. I thought Trump's best phrase was when off-the-cuff he said "Either we have a country or we don't." Exactly!

I don't know what Lamont will do if elected. His website makes no mention of immigration, which is probably better than average for his party. The Republican Bob Stefanowski doesn't list it either. I worry about him being a big-business guy. I wonder what form another political miracle would take now.

James Fulford writes: Stefanowski was at the same Larry Kudlow birthday party that Peter Brimelow attended, and fell over himself in the rush to disavow him. [Bob Stefanowski Says He Didn't Know White Nationalist Promoter Was At Larry Kudlow Party,  By Neil Vigdor, Hartford Courant, August 22, 2018]