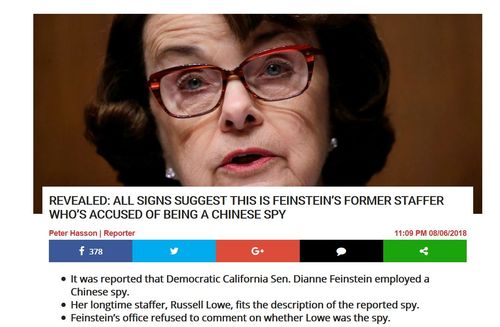 “China Di” Dianne Feinstein’s recent outing as the 20-year employer of a Red Chinese spy, comes as no surprise.

As Mayor, Feinstein decreed San Francisco to be the nation’s first Sanctuary City in 1985, opening the floodgates to millions of Third-World border jumpers and visa violators.

She burned through the City’s large budget surplus with many trips to China and Russia, explaining her goal was to create "Sister Cities" with these not-so-friendly, communist nations. Feinstein also negotiated the entry of hundreds of thousands of Russian “refugees”– including the Russian mafia—with generous lifetime benefits paid by US taxpayers. And then I recall the night a Red Chinese ship sailed under the Golden Gate Bridge, with hundreds of Red Chinese coming ashore at a public dock and disappearing into the night while Mayor Feinstein did nothing. Where’s the Mueller investigation?