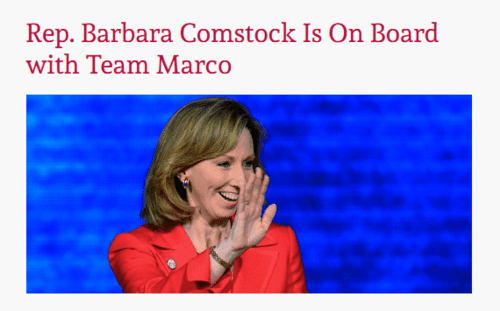 Why am I not surprised that my Congressional Representative from the Virginia 10th District—Barbara Comstock (R)—has just endorsed Sen. Marco Rubio to be the Republican nominee for president?  As a freshman she has already racked up the lowest Numbers USA grade  (a pathetic F  ) of the Virginia Republican delegation.  She also has an atrocious Liberty Score of F / 25% from Conservative Review.

Her gushing endorsement for Marco Rubio for president stated he would:

“…focus on the future, rejuvenate our economy, and create a strong, safe and prosperous America that provides everyone the opportunity to experience the American Dream.”

Unfortunately, Marco Rubio has an egregious track record on immigration including his being a principal architect of the treasonous “Gang of Eight” immigration legislation.

Therefore, Comstock’s ideal of Rubio providing “everyone the opportunity to experience the American Dream” would include twenty million newly legalized illegal aliens, and hundreds of thousands of foreign workers entering in on H series immigration visas!  As for being “prosperous” that would be reserved for Rubio’s open borders, elite backers.  And these newly admitted and legalized hordes would hardly result in America becoming “strong and safe”.

It should be pointed out that Barbara Comstock was originally a Democrat, and her first political job was working for Sen. Edward Kennedy, (D) MA.  This apple did not fall far from the tree.