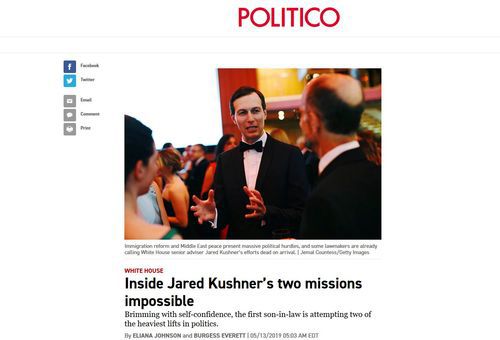 Re: Kushner’s Plan Maybe Not DISASTROUS For Immigration Patriots, But Trump Should Go Back To RAISE Act Anyway

I occasionally watch Bill Maher on HBO to get an idea of how the other side views the big issues of the day. While I rarely agree with Maher, he can be reasonable on some issues. During his “Overtime” segment this past week, he asked his panel, which included former Massachusetts Governor William Weld, about the Kushner immigration plan.

Both Maher and Weld viewed the proposal as somewhat sensible, and even worth considering. I have included the clip below, and the pertinent part starts at about 3:05. Bill Maher does have a significant fan base, and a fair amount of influence on Democratic Party politics. Even with a Democratic House, it may be possible to get this passed if enough Democrats join with the GOP. This could be done through the utilization of a Discharge Petition in the House, whereby all the Republicans and about 20-25 Democrats sign the Petition to force a vote.

There may be just enough Democrats in Trump Districts, like Joe Cunningham in South Carolina, who would be willing to go along with it. President Trump should use his bully-pulpit to promote it. It is worth a shot.

I know that the proposal from Kushner is far from ideal. There have been some excellent articles on VDARE.com explaining the flaws in the proposal, namely the large numbers and the risk of importing an overclass. The plan, however, nicely sets up the basic structure of a patriotic immigration policy.

If the Kushner Plan becomes law, subsequent legislation could be passed to reduce the numbers to about 300,000 per year and make them country-specific like the 1924 Immigration Act. Requiring that 70% of the visas must go to Eastern European countries and Ireland, and then requiring another 20% to go to Western Europe and other European-derived nations would restore immigration patterns to what they have traditionally been. I do not think we are going to implement our agenda with one legislative act. It took several actions when we shut the door in the early 20th century. It will probably take the same this time.