A Tampa Bay Reader Says That “Black Lives Matter”, PC Policing, And A “No Snitching” Black Culture Have Doubled The Local Murder Rate

Tampa, Florida, a place known for sun, sports, and crime, saw its homicide rate increase by almost double in 2015. The homicide total was 34, of which 20 are still unsolved. As we enter 2016 the high homicide rate continues just as the Black Lives Matter movement exercises inordinate influence on communities across the country. Violence carried out mostly by young blacks is becoming epidemic as the Obama Administration directly conducts investigations into “suspicious” police departments, causing local police to retreat to politically correct positions. This is directly contrary to the stronger “Broken Windows” police work usually more effective in black neighborhoods.

The City of Tampa is really a small but volatile island in a huge county called Hillsborough. The police force for Hillsborough County is stupendous compared to that of the City, but crime has also increased in the suburbs as black and Hispanics migrate outward. 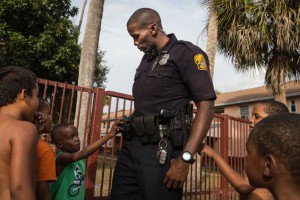 Violent crime abounds in the county because of Hispanic gangs. The Tampa Bay Times discussed only Tampa in its front page article of March 5, 2016 and admitted that distrust of police is a major problem. The writer, Dan Sullivan, had no new insights and repeated the old liberal shibboleth about building community trust. [Tampa police struggling with trust in black neighborhoods marred by violence, By Dan Sullivan, March 5, 2016]

Mr. Sullivan interviews many suffering adults in black neighborhoods who lament the violence but seem to join the silent majority who refuse to “snitch.” Even friendly black cops can’t break that barrier.

Ferguson and the Black Lives Matter movement threaten the social order as Obama’s Justice Dept. harasses local police and forces them to play a more passive role in dangerous confrontations. The paranoia seen in black elites is certain evidence of their incapacity to assess the harsh realities of black underclass black violence, a phenomenon cutting across many countries and cultures. Tampa, however, will be the least likely place to solve this problem. The leftist Tampa Bay Times will only add mountains of misinformation to the public morass.