A Talk Radio Listener Wonders What They're TEACHING At OSU

After the Somali student ran amok, stabbing 8 or 9 presumably white students,  black Diversity Officer   Stephanie Clemons Thompson [Email her]  unburdened herself of this on Facebook., as reported by PJ Media. 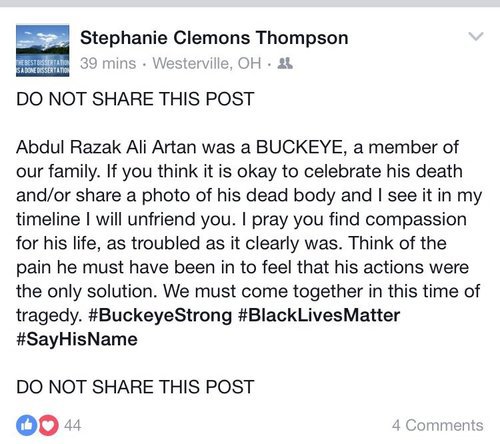 Her name has suddenly vanished from the OSU's Diversity Office website

In related news, I heard on CBS radio news the morning of the attack, an interview with a black OSU "academic advisor" who said "I seen ...." "See" is an irregular verb in Ebonics, hence "I seen" rather than "I done see". [Witnesses Recount Chaos at Ohio State November 29, 2016]