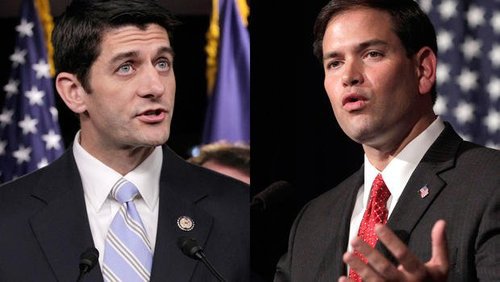 A Talk Radio Listener Says That Rubio Is A Head Fake; Ryan Is The GOP's Real Plan B

It's clear from the comment threads and talk radio callers that the Republican base detests Rubio more than any other establishment candidate. The current Neocon/cuckservative campaign to minimize Rubio’s grand larceny from the Florida Republican Party is not working. Instead, it has provided new opportunities for disgusted voters to post vitriolic yet well-informed comments about Rubio's lies and betrayal on amnesty.

The decline and fall of Jeb Bush during a period when he outspent everyone else combined suggests that Paul Singer's fortune will not move Rubio substantially higher in the polls. The imminent withdrawal of Bush will have a greater impact, but only of about 5%. Instead, the Singer fortune will be used to solidify Rubio as the slavishly pro-amnesty, pro-Israel, and pro-LBGT Vice-Presidential candidate to run with the enemies' real Plan B candidate, Paul Ryan.

Ryan will be kept in reserve until late in the primary process or even until the convention. All that the establishment will need to do is to prevent Trump from amassing an outright majority of delegates. Without a majority at the convention, the establishment will use bribery and threats to combine nearly all of the non-Trump delegates behind their stealth candidate, Ryan.

Trump's most dangerous opponent is Carson, not Rubio, because Carson attracts anti-establishment voters who might otherwise support Trump. At the convention, the Carson delegates will be delivered en masse to the establishment candidate, and Carson will receive a payoff that will make his fraudulent medicine wagon earnings look like chump change. Carson is the equivalent of a placeholder paid to stand in line at an Apple store when a new Apple toy comes out.

Thus, what Trump needs to do is to concentrate his attacks on Carson and Ryan. The base have made up their minds about Rubio, but they suffer from susceptibility to the promise of a Magic Negro, and they aren't well informed about Ryan's career of betrayal.