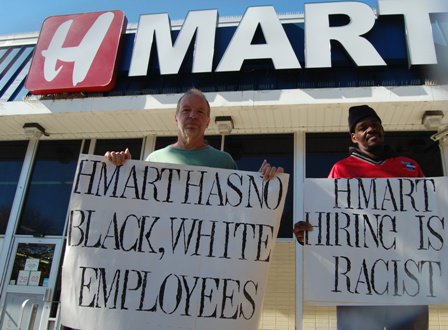 Yesterday, at a New York State Korean H-Mart I heard a Korean employee who was talking on his cell phone. It was on speakerphone with the volume turned up.

As I passed by, I heard an American voice explaining how to qualify under the Obama amnesty. The government must be paying the immigration lawyers to advise illegal aliens, but I wonder how it's being done.

James Fulford writes: First of all, if America is  going to import illegals, thieves, murderers, and gangsters are one thing, but not people who use cellphones on speaker in public.

Public use of cellphone speakerphone? pic.twitter.com/rUdyiE3VYw

Second, I'm not surprised that HMart [Send them feedback] has a Korean illegal on staff—they don't hire anyone but Koreans (claiming a language requirement to get around the civil rights laws) and legal immigrants from Korea are, or should be, way overqualified to be supermarket cashiers.

Here's the story from WikiPedia:

In 2012, outside the Flushing, New York location, pop-up picket lines appeared to protest H Mart's hiring practices. According to Jim MacDonald, the protest organizer, and two friends, said that a nearby Waldbaum's closing is the reason for their discontent of the companies hiring practices which are mainly of Asians or Koreans.[16] The trio said that several other nearby stores all have disproportionate levels of employees meaning that there were almost no white or blacks in any of the stores they visited.[17] In a statement by H Mart stated that the company, "does not screen employees by race, but by their capabilities. The reason Korean employees dominate the chain’s Flushing stores, he said, is so they can cater to an incredibly large population of residents who do not speak English."[17].

Right, and those non-English speaking shoppers are the wives, and in some cases the servants, of H-1B holders who are taking good jobs from regular Americans.

I'm going to put a "VDARE.com told you so" tag on this—we've been saying for years that these "immigrant entrepreneurs" benefit mostly other immigrants, starting with Immigrant Entrepreneurs Less Benefit than They're Cracked Up to Be, by Steve Sailer, February 22, 2000