I went to support the IT workers whose last day on the job was April 22, 2016 working for Abbott Labs in North Chicago, IL. To add insult to injury not only did these 200 IT professionals lose their jobs, but they had to train their replacements from India.

I was sitting in my car killing time in the parking lot of Flanagan’s Bar and Grill at Buckley Rd (Great Lakes Naval Training Center is about 10 minutes east on Buckley Rd from where we were) and RT 41 and he pulled up alongside of me. At first he thought I was from Abbott spying on them until he saw my jacket that said I was a union Sheet Metal Worker. 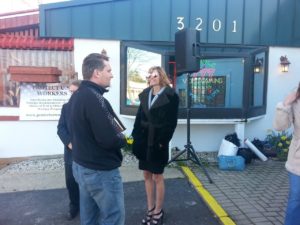 He asked me why a union construction worker would show up to support them. I told him it wasn’t a union thing; it is an American worker thing. Plus, I’ve worked at Abbott with our union contractors and they hated us. So I figured if anybody from Abbott showed up snooping around, I could tweak their noses a little bit just by wearing my union jacket. Abbott kept the unions out by showering their employees with all kinds of benefits. By the time Abbott got done with them, the unions didn’t have anything more to offer, plus the employees didn’t have to pay union dues.

We went into the bar / restaurant area where I met Sara Blackwell (pictured right) who is the attorney representing Marco and the others who refused to sign away their rights.

Then I met a man that drove about four hours all the way from the university where he worked to address the crowd. After talking to him he told me that he was a professor who taught in the engineering department, and he felt he had to be there. Then I asked how he found out about this, and he said he read it at VDare.com! Actually I met and talked to three people who read VDare.com all the time.

he crowd started getting bigger and finally Michelle Malkin showed up along with John Miano. The rally was supposed to be outside but a crisp North East breeze off of Lake Michigan pushed us inside.

The first person to speak was Sara Blackwell who introduced herself as a divorced mother of three. When was the last time you heard a woman use that phrase?

Michelle Malkin gave one of the most inspirational speeches I have ever heard.

This woman is fearless, and has the heart of a lion! It was worth the hour and fifteen minute ride just to hear, and talk to her and tell her what an inspiration she’s been for me on this immigration fight.

So in closing, when I read about this kind of stuff going on, it really doesn’t hit you until you meet the people and look into their eyes, and see the pain that we can’t possibly know.