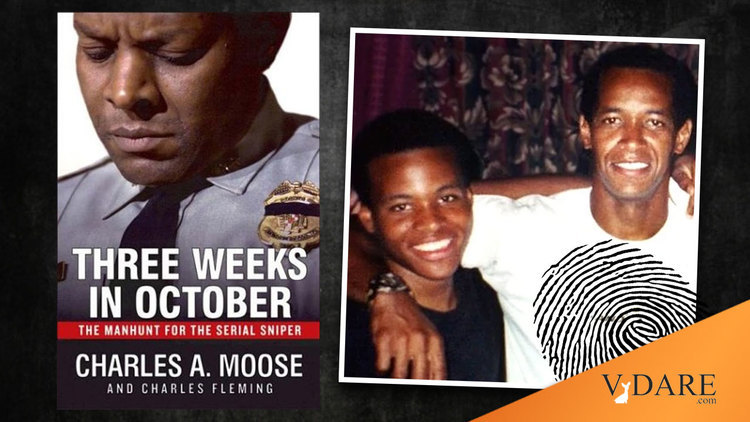 I can't change the TV channels without seeing the ubiquitous mug of my former Montgomery County, Md. police chief-turned-author Charles A. Moose.

First, it was Dateline NBC with Stone Phillips. The following morning, he chatted up the Today Show's Matt Lauer. Now, he's hanging out on CNN.

Next up on the publicity tour for Moose's new book on the serial sniper investigation: The Tonight Show with Jay Leno. I'm sure the victims' families will think it's an absolute riot when Moose and Jay trade jokes about white box trucks and tarot cards. Haw-haw-haw.

While Moose yuks it up with Jay, prosecutors in Virginia are hard at work preparing for the capital murder trials of accused snipers John Muhammad and Lee Malvo.

"Personally, I don't understand why someone who's been in law enforcement his whole life would potentially damage our case or compromise a jury pool by doing this," assistant Prince William Commonwealth's attorney James Willett, who is handling the Muhammad trial, told the Washington Post. [Charles Moose's Memoir of A Manhunt, By Linton Weeks and Matthew Mosk, September 11, 2003]

Why would Moose risk tainting the prosecution of the cases? Why would he jeopardize the pursuit of justice?

The obvious answer is greed. Earlier this spring, Charles "Show me the money" Moose quit the job he claimed to love so much rather than forego the $170,000 book advance and $4-a-book royalties that a local ethics board ruled he couldn't collect.

There's another answer. After reading through his hastily written screed/diary/memoir, it is clear that Moose has put the lucratively therapeutic exploitation of his lifelong racial grievances above public safety.

Moose recounts the time he went horseback riding in Hawaii with his wife. The guide, who "was sort of flirting" with his wife, asked what they did for a living. Moose darkly suggests that because the guide mistakenly told another rider that Moose was a police chief near (rather than in) Portland, he must be racist who couldn't believe a black man could hold such a position.

Moose also claims he and his wife were stopped by hotel security staff in Phoenix who wanted to see their room key. "Apparently" they thought his wife was a prostitute and he was a john.

Moose recalls how he exploded when he couldn't get anyone to wait on him at a Nordstrom's shoe store in Oregon. (He should visit my J.C. Penney's.) "I saw other customers get waited on. I saw they were white. I saw the salespeople were white. I was the only black guy there." He shouted at the "honkies" and stormed out of the store.

A few years later, he became completely unhinged while waiting in line at the Portland city employees' credit union. The woman behind the counter was white. "I just went off. I started yelling at this white woman working the counter, and this white guy she was waiting on, about how long I'd been waiting and how p—sed off I was that they were making a black man wait in line…"

Later, he cursed at a white Portland city employee crime prevention specialist who reprimanded him for not dressing better out of uniform.

Then there was the time that he was stopped by D.C. transit police on a Metro train who simply asked for identification. His wife wanted to file a discrimination lawsuit.  As first reported on Worldnetdaily.com, the Mooses ended up brokering a successful shakedown of a much bigger target—the Marriott corporation, which shelled out $200,000 when the couple claimed hotel security workers at one of Hawaii's most luxurious resorts were racist because they asked for ID.

More recently, Moose immediately assumed racial persecution in Chevy Chase when a woman working out at his apartment building's gym simply asked if he worked or lived there.

Rank-and-file cops in Montgomery County have charged that Moose's racial blinders endangered patrol officers and investigators (from whom physical descriptions of the suspects were withheld)—and probably cost lives.

Moose does little to dispel those suspicions when he preaches that "We must all be social engineers" and admits to having "complicated" feelings about Muhammad and Malvo because they are black.

Of this I am certain: The race-obsessed former police chief's path to Jay Leno's sofa was paved in unnecessarily spilt blood.