A Reader Writes That The Onrushing "Non-White Majority" Could Be Delayed, Or Even Averted, By Ending Special Privileges For Non-Whites

Re: James Fulford’s blog item “Racism” And Corruption: “I Think I Spot A Disproportion”

From: An Anonymous Canadian Reader [Email Him] 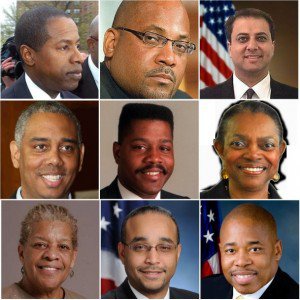 “Melvin Lowe (top right in the gallery [of allegedly corrupt politicians, right]) looks white, but he’s passing: When former Yonkers Councilperson Patricia McDow was asked about an encounter with him back in 2008, “McDow said she had assumed that Lowe had been assigned to lobby her because they are both black.”

He looks white. He may well be pulling our collective leg, any moron can see that’s he’s “white”– I mean, he’s almost whiter than Paul Ryan.

The onrushing "non-white majority" could be put off for a while, or even averted, given a simple change in priorities.

Currently, it’s fashionable to be non-white, mostly because of all the perks that accrue to non-white status. But imagine if all these perks were withdrawn (such as the abolition of affirmative action, which might just be doable), and there were no perceived advantage to being non-white.

The “tipping” might go in another direction, for a while at least, as people like Melvin Lowe have more incentive to come to their senses.

James Fulford writes: In the nineteenth or early twentieth century, people with who were one-sixteenth or one thirty-second non-white would try to pass for white, now Elizabeth Warren, who is at most a 64th Indian, is claiming to be a minority. Steve Sailer discussed this in Jim Webb, The GOP, And The Sammy Sosa Solution