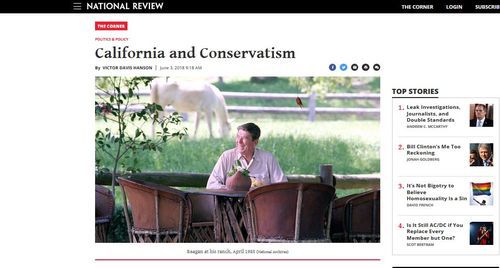 From: A German-American Reader  [Email him]

Reviewing the June 3  National Review Online article California and Conservatism by Victor Davis Hanson  about the political prognosis for a return to conservatism in California makes it obvious that he and NRO live in a world of make believe.

Essentially, these NRO wonks have cult like adherence to their so called "pure" but hopelessly idealistic conservatism, supposedly transportable to all peoples, believed only by bow-tied mama boys working at cloistered conservative think tanks. VDH purposefully ignores decades of party specific and generic political preferences polling data, plus election results to come to these absurd conclusions. His globalist "conservatism" may have seemed effective in an earlier time period, but in reality its demographic limitations were masked by the then predominant white population who, for example, elected Ronald Reagan twice for governor and twice for president in CA. When such conservatism was later stress tested by demographic change in that state it was found to be seriously nullified by a new population of voters who will never identify with it.

Now, with whites being swept away in many regions of the nation, the harsh reality that NRO's universalist type of conservatism (that allowed for significant immigration) neither sustained the whites, nor appealed to their replacements, is too much for the poor dears to bear. Consequently, people such as VDH write these sad little articles hoping for a new day of conservatism in areas like California that will never come again.

However, to state that "demographics is (political) destiny" in NRO is grounds for unceremonial dismissal from that publication, even though the rest of the world acknowledges it readily.