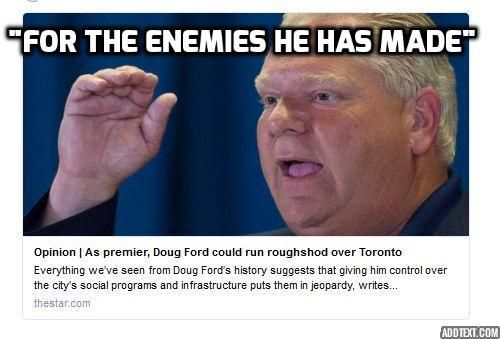 From: "Johnny Canuck" [Email him]

In the Canadian province of Ontario, where I reside, there's an election going on which might put Doug Ford (brother of the late Mayor Rob Ford) in the Legislature as Premier (equivalent, allowing for our Parliamentary system, of Governor of an American state.)

As an old stock White Anglo-Canadian, I don't expect any candidate to represent my interests. In fact, I believe that under Canadian law, this would be illegal.

But when I saw this, I thought "Electing this guy won't make me happy, but it will make people who hate me unhappy", so I toddled off to vote.

The candidate I voted for didn't win, but the man who gives leftists nightmares will probably form a government.