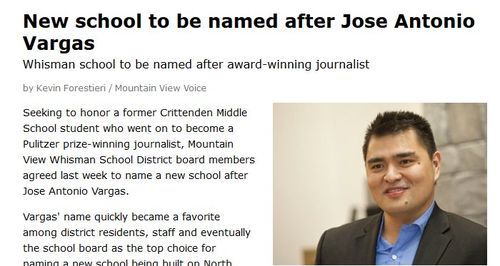 From: "Angry Californian" [Email him]

Another abomination from my home state of California:

New school to be named after Jose Antonio Vargas

This is Jose Antonio Vargas, the "undocumented" citizen (or alien—what's the difference?).

James Fulford writes: Vargas is not actually a "Pulitzer prize-winning journalist". He was an extremely junior member of a Washington Post "team" that got a Pulitzer for coverage of the Immigrant Mass Murder at Virginia Tech. 11 reporters got bylines: Vargas, who was working illegally at the Post using fake ID, was one of them. It's interesting to note that his high school class couldn’t go to Japan on a trip because he wouldn’t have been allowed back in to America—they had to go to Hawaii, instead.