In Florida concrete evidence of cultural decline is everywhere apparent. Book stores are replaced with seedy Mexican eateries or markets, Hispanics are now dominating the billboard landscape. Spanish intrudes on life far more often than a few years ago.

In the Tampa Bay area there was a SSA office about one half mile from my home. Going there years ago for various reasons, including help for a disabled family member, I observed about an equal mixture of blacks and whites that numbered usually about 15-20. The wait time rarely exceeded 30 minutes and could be much less at times. Hispanics were third in numbers before 2000. Those were the good old days!

Then the same SSA agency moved about three miles away to a much larger office space. Going there after 2000 made a different impression. Hispanics not only increased but the Hispanic immigrants were mostly elderly or disabled. Younger ones were plainly uneducated, tattooed, and sometimes menacing. Nothing about this surging demographic was appetizing. America was actively importing trouble! Additionally, I noticed a big increase in Hispanic employees of SSA, including managers. Under Obama “people of color” have had a heyday getting government jobs.

Wait times at the newer office gradually increased from about 30 minutes to over an hour. The increased seating capacity was eventually inadequate but recent days show a dramatic change. I suddenly realized that a simple visit to SSA was no longer a possibility as the line of miscreants snaked out the door and extended into the parking lot for over 30 yards. Looking at this parade of the wretched I saw our own version of The Camp of the Saints waiting to get their “entitlements.” Our government actively seeks to make us more like Brazil and it has met very little opposition.

What fraction were illegal I do not know, but Trump’s honest warning about importing ignorance and decadence is what Americans should stand for if they wish to have a better future.

James Fulford writes: Below, for comparison, a 1937 lineup at a San Francisco Social Security office, shortly after the program was started—note the hats, cigarettes...and Americans. 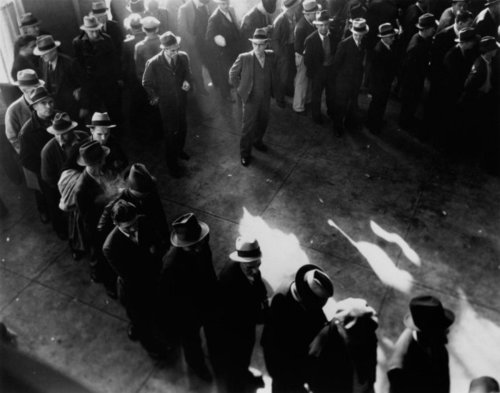