Re: Rand Paul Sinking—But Is It Due to Foreign Policy Flip-flops or Racial Pandering?

From: An Analytical Anonymous Reader Email Him

Evidence continues to mount that the Rand Paul approach of libertarianism and pandering will not result in a 2016 victory, rather only through GAP (Generic American Party)populism can the GOP win.

Table 3: Vote for Romney in 2012 by age and political orientation 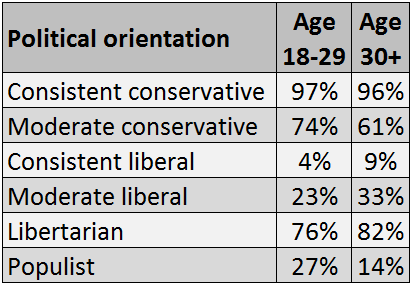 The UVA Center for Politics (Larry Sabato) reports [Table 3 from the Sabato article, above] that only in the "Populist" and "Conservative" categories did Romney do any better amongst the "youth vote" than among the over-30s.

And the "youth vote" attitude is affected by nonwhite proportion of the 18-29 block, which Rand favors enlarging through immigration and re-enfranchising felons.