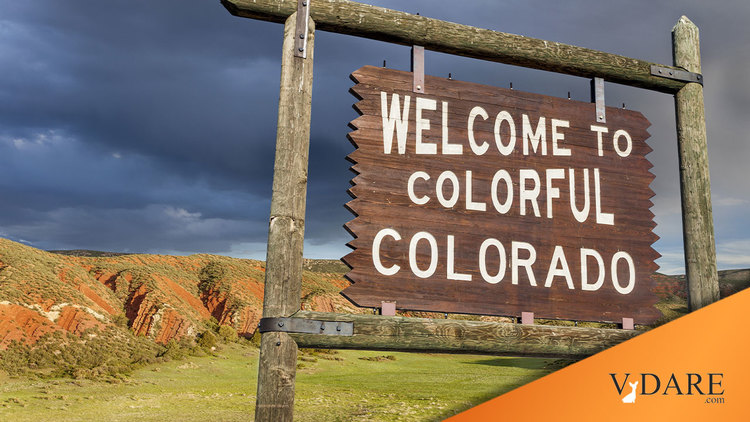 A Reader Says Colorado Is No Longer A Red State, Having Been Overrun With Californians And "Other Newcomers"

Re: Another Muslim (Immigrant) Mass Murder

From: Thomas In CO [Email him]

That was a good article on immigrant mass murder but you are wrong about Colorado being a red state. Colorado is not a red state.

It was at one time but has been overrun with Californians and other newcomers who have turned it into a blue state.

James Fulford writes: I had written that

Colorado, which is a strong gun rights Red State, is thinking of enacting new gun laws—which It did in 2013 after the Newtown Massacre, and the backlash from that led to some anti-gun Colorado politicians being recalled, as I recounted in After The Successful Colorado Recall We Ask “Why Can Gun Grabbers Have A 'Moral Panic' After An Immigrant Mass Murder, But Immigration Patriots Can’t?”

Looking into it, he's got a point. Colorado has two Democratic Senators and four out of seven Democratic Representatives.

The great Tom Tancredo represented Red State Colorado, and the fact that pro-gun GOP representative Lauren Boebert represents a district actually called Rifle, Colorado means that the old spirit isn't dead, but it must be a minority.

That being said, the "other newcomers" include, apparently, Syrian immigrants, and Colorado is now 20 percent Hispanic.