From: Greg Aprahamian [Email him]

I was invited to the LA County Republican December 11 “holiday” party, hosted at Barney’s Beanery Restaurant in Westwood.

I went with another Tea Party friend of mine and a NO AMNESTY sign to display proudly at our table. I also brought copies of the Petition [below] signed by 15 wayward California Republican Assemblymen, who secretly petitioned John Boehner and all California Republican Congressmen to pass Amnesty and mass legalization of illegal aliens.

I assumed it was safe to have a “No Amnesty” sign displayed at a private Republican gathering. I soon found out that I was mistaken.  After I placed the sign at our table, several Republican “officials” noticed it and became incensed. They fiercely demanded that I take down the sign, claiming that this was a private gathering and not intended for political discussions. (Imagine enforcing a "no political discussions rule" at a Republican party gathering!)

Judging from the anger coming from the LA County Republican party organizers, it was obvious to all that a No Amnesty message would not be tolerated at this Republican setting.

I told the LA Republican Party officials that I was invited to the gathering; I showed them the invitation.  I then told them that if I were not allowed to display the sign, I would leave and display the “No Amnesty” sign in front of the restaurant for the Republican attendees to see as they arrived.

Soon afterward, a Republican official ordered security to escort me out of the party. True to my word, I proudly stood in front of the restaurant with the No Amnesty sign and handed out copies of the Amnesty petition that 15 of our sell out Republican Assemblymen drafted and signed.

As I stood outside of the restaurant, I had a great exchange with quite a few attendees.  Many were genuinely shocked to hear of the Amnesty petition.

Just as the LA County Republican Party officials rushed to get suppress the No Amnesty message, the Republican Establishment is doing the same thing on a State and Federal level…rushing to crush any dissent on mass Amnesty,

Judging from this encounter, control seems to be the priority for the Republican Party of today.  Challenges to that control are dealt with swiftly.

Though the Republican Party of California is currently greatly diminished and in deep minority status, crushing opposition to the party line seems to be more of a priority than growing its numbers.

The great question: can the tight party control that wants to crush dissent on enormously popular issues such as opposition to Amnesty also win elections?

Driving out the Tea Party, and passing some sort of Amnesty for illegal aliens, is definitely an objective of the Republican Establishment of today. But isn’t that a little like amputating the right arm of a baseball player and then expecting a home run?

The LA County Republican “holiday” party at Barney’s Beanery was a real gas.

James Fulford writes: Contact the LA County Republicans here, Chairman Mark Basil Vafiades here.  I hadn’t heard of the letter petitioning Boehner to pass amnesty  that Greg Aprahamian mentions—it’s the kind of thing that a sensible State Senator would want to keep from his constituents—but it turns out it’s not a secret. Google and I found PDF copies of it on the website of—wait for it—the Western Growers Association! That, for those of you who don’t know it, is the wealthy agribiz organization that’s been lobbying for cheap labor in California for as long as anyone can remember.

The letter, which was the basis for a WGA full page ad,  says: 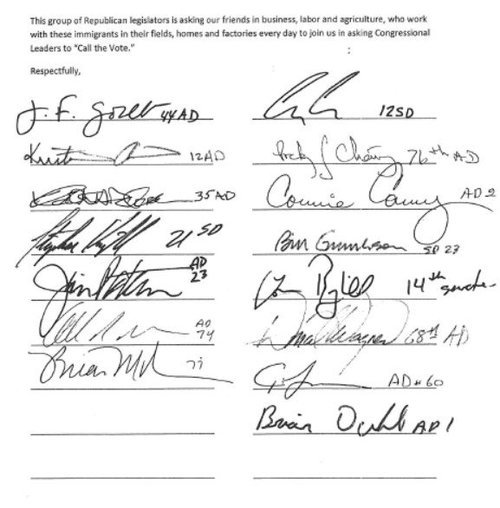