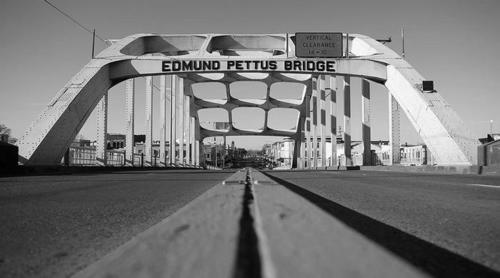 Having endured “Selma Week” on the main-stream media that lauded its white guilt, black grievance, anti-voter ID, America the horrible themes, illegal immigrant rally, and LGBT love fest I thought I could find a respite on supposedly conservative sites this past weekend.

Well, I was wrong because when I landed on National Review Online the lead, big screen article was The GOP’s Conspicuous Absence from Selma by Charles C. W. Cooke [Email him](a NRO staff writer).

The basic premise of the article was bad enough, that the GOP should be there because it needs to recognize public dissent as part of America’s tradition. This is a simplistic proposition as dissent can be for good or bad reasons and by a variety of people, also good or bad.  In fact, the 2015 Selma march had devolved into a Cultural-Marxist festival sponsored by the Democrats and various radical groups.

Then it gets worse…

Cooke reaches for the extremes of historical revisionist analogies to come up with the following equivalences between the founding fathers of America and the original Selma marchers:

“If we are to put George Washington upon our plinths, and to eulogize him on our currency, we must agree to elevate Martin Luther King Jr. to the same dizzy heights”

“…by virtue of their brave march across the Edmund Pettus Bridge, John Lewis and Hosea Williams immortalized themselves into quintessential American heroes in the mold of Sam Adams and George Mason.”

“If all men really are created equal, the anniversary of Selma must be treated as a date every bit as important to American history as is the end of the Siege of Yorktown.”

For any educated person these historical equivalences are tortured, not to say blasphemous.  And be advised the popular history of the Civil Rights movement, similar to Martin Luther King’s, is highly redacted.[See Selma to Montgomery, 30 Years Later, American Renaissance, May 1995]]

It is obvious that NRO having purged its ranks of conservative writers is now seeking to dwell in the same social-political penumbra as Politico, The Huffington Post, et al. where I would have expected to see such an idiotic, politically correct article.