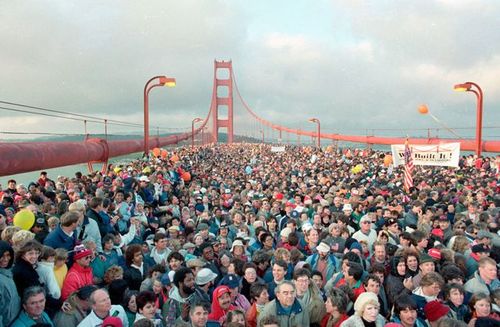 A Reader Remembers Another Zombie Apocalypse That Wasn't—Golden Gate Bridge, 1988

Re: A Reader Observes That There Was No “Zombie Apocalypse” In Rural Mississippi During Katrina

From: A San Francisco Reader [Email him]

In San Francisco, there was another potentially catastrophic situation which resolved well, thanks simply to the kind of people involved.

In 1988, the city scheduled a celebration for the 50th anniversary of the Golden Gate Bridge.  The plan was to close the bridge to automobile traffic for a few hours starting at 5:00 AM on a Saturday, and invite people to walk across the bridge, north from San Francisco, and south from the Marin headlands.  The city vastly underestimated the number of people who would participate, entering the bridge and swelling to take all available lanes, from both ends.  When the northbound crowd met the southbound crowd, neither group could pass, nor communicate to the ends to stop the ingress.  It became jammed, with people stepping on dogs on leashes and children, and denting the high-school bands’ instruments.  Claustrophobics panicked and vomited, and children wailed.

Eventually police helicopters understood the situation and the crack San Francisco Police Department sprang into action, using megaphones to badger people in the middle of the bridge to leave, when we couldn’t move an inch.  It took hours for me to get off the bridge.  Later reports [PDF] said the bridge actually sagged measurably under the load which far exceeded its design specifications.

I vividly recall discussing with some amusement with people around me that it we might just die in the largest disaster in human history, and yet the crowd had the demeanor of one in London tube stations during the Blitz.

As you’ll see in the picture, the audience was overwhelmingly of a certain genetic makeup.  There was no violence.  There was cooperation, with people trying to help the claustrophobics, people hoisting strangers’ kids onto their backs to keep them safe.  There were strong men leading and reassuring the less strong, and grandmothers comforting strangers around them.   It was an astonishing experience.

If this celebration had been on the city’s other bridge that links San Francisco to Oakland, which has a different kind of population, I believe there would have been tens of thousands of deaths due to mob violence.

Today, the city has changed completely, and we scan the upcoming-events section in order to avoid crowds and traffic jams, rather than to find entertainments.  Today, no picture in the region would show the kind of uniformity you’ll see below.  In retrospect it’s startling for me to see: so gradually does the lobster pot’s water heat.