Eulalio Tordil is a Filipino immigrant. I had a long time finding that fact and found it on Inquirer.net. 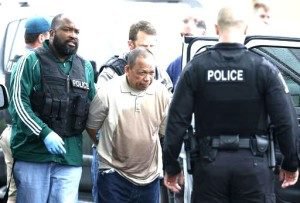 Filipino nabbed in shootings that killed 3 in Washington, DC area

He is the "Maryland man" who worked as a Federal security officer. He had restraining orders because he was a child molester. He murdered his wife and a man who tried to help.

MANHUNT FOR COP: Murder suspect could be linked to 2 Maryland shootings | https://t.co/xJuutyvCmj pic.twitter.com/R4HyNBlUue

So, if the government can't vet its security officers, are we sure they can vet refugees?

James Fulford writes: The reason Inquirer.net feels safe in printing the shocking word "Filipino" in a headline about a murderer—who is almost certainly a naturalized American citizen—is because Inquirer.net is headquartered in the Philippines. We've seen this before—a case where Indian immigrants kept an Indonesian woman as a slave in America was reported in the American press as "New York woman" and in the Australian press as "US Woman", but the Indian press wrote: Indian-American jailed for 3 years for torturing housekeepers, OANA, June 29, 2008.