An Talk Radio Caller [Email him]

I like to call talk radio shows to promote VDARE.com-friendly views. Today I called the Michael Medved show to defend Trump and I pointed out that the aftermath of the 1965 Immigration Act will increase the U.S. population by almost 80 million by 2050. I also mentioned that the Schumer-Rubio bill would potentially have added another 80 million. (My estimate: 20-30 million given amnesty + 30-45 million family members coming in under family reunification/chain migration + their babies - deaths).

Medved told me that the Gang of Eight bill would not have caused any increase in the U.S. population in addition to the increase caused by the 1965 immigration act (which will add ~77+ million to our population by 2050 according the Census Bureau).

Question: In addition to the 398 million people we will have in 2050 because of the 1965 Immigration Act, how many more would we have due to the Schumer-Rubio bill? I tried to get this info from the office of Sen. Jeff Sessions in 2013, but I was not successful. Any help you could provide would be greatly appreciated.

Foreign-born Americans and their descendants have been the main driver of U.S. population growth, as well as of national racial and ethnic change, since passage of the 1965 law that rewrote national immigration policy. They also will be the central force in U.S. population growth and change over the next 50 years.

That kind of projection assumes no basic change in immigration policy, such as might be caused by the election of a President Trump. While the sob stories about Dreamers and people “living in the shadows” got most of the attention in the short term, it’s often forgotten that the Gang of 8 bill, S. 744, would have at least doubled legal immigration. From a Sessions press release published at the time:

Analysis of Future Flow In Gang of Eight Plan: More than 30 Million Immigrants Granted Legal Status In 10 Years, With The Ability To Bring Their Relatives

An Additional 25 Million Will Be Granted Nonimmigrant Work Visas, Bringing Total to 57 Million

The Gang of Eight has stated, “this legislation does not significantly increase long-term, annual migration to the United States” and has indicated the legislation shift the United States from low-skill and chain migration to high-skill merit-based. Conspicuously, however, they have refused to provide an estimate of future flow. A conservative analysis of the legislation, with low-range estimate s for the new and expanded visa programs, reveal s that the proposal would dramatically increase the future flow of low-skill workers and chain migration and provide legal status and work authorization to 30 million immigrants over the next 10 years — who will then be able to bring in family members, initiating a wave of non-merit-based chain migration that will greatly increase low-skilled immigration. [PDF]

There's a lot more information available, in Steven Camarota's Foreign-Born Share Would Hit Historic High in Seven Years Under S.744, Center for Immigration Studies,  June 2013. He only carried the estimate up to 2033, but it added at least 16 million at that point: 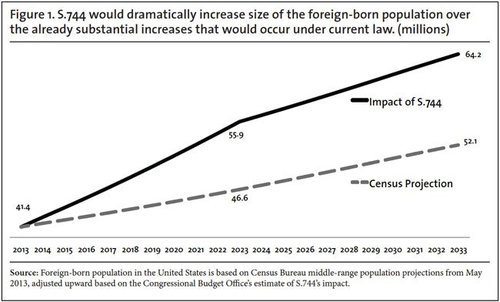 The main point is that of course the Gang of 8 bill would have added to the population—and even if you liked the idea of legalizing illegals, there's no justification for that.