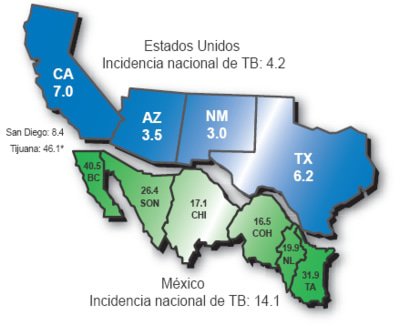 A Reader Reports A TB Scare In El Paso, Which Is NOT Being Reported Nationwide

From: Brian In Texas [Email him]

I wanted to let you know about this as it's not getting much nationwide coverage. Of course this article will not point out how much of this is caused by immigration in this city.

Health officials: 71 people positive for TB, none believed to be active

Cases at Frank Macias Elementary School and Lower Valley halfway house were unrelated, none are believed to be active tuberculosis cases

No active tuberculosis cases have been found in the two recent incidents of exposure to the disease in El Paso County, although 71 people have tested positive for TB.

One TB investigation began June 15 at the Clint Independent School District elementary after a person associated with the school was diagnosed with the disease.

In an unrelated investigation, health officials also started testing residents and staff members at the Dismas Charities on July 6 after being notified that a person associated with the halfway house tested positive for TB.

Neither person has been identified.[More]

James Fulford writes: The school mentioned above as exposed to TB is 92 percent Hispanic, and 67 percent "English learner. " That is to say, it has a large number of Mexican immigrant students. In Mexico, they know that there's a TB problem, and who's causing it—the map above is from an International Community Foundation report titled Tuberculosis en la Región Fronteriza Tijuana-San Diego.

In the American press, they shut their eyes, because they'd be "playing into the hands" of people like Donald Trump, who has said that that Mexicans are bringing “tremendous infectious disease … pouring across the border”.