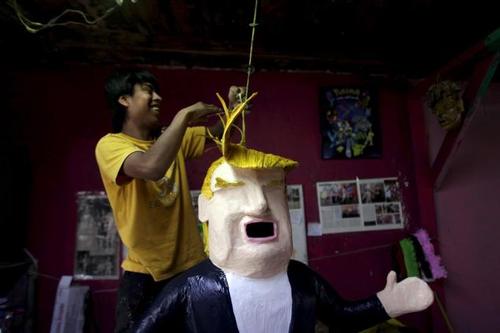 A Reader Reports A Hispanic Hate Group Planned To Beat Trump To Death In Effigy At A UNIVERSITY. Where’s The “Trigger Warning”?

From: Ryan [Email him]

Imagine the following scenario, if you will. Somewhere in the Midwest, a white college group plans a fundraiser for Donald Trump that will feature a piñata of Luis Gutierrez as a centerpiece. They do this, in their own words, to "honor white heritage." The cuckservatives would be predictably appalled, alongside the usual liberal suspects. Strong condemnation and cries of "Racism!" would be widespread.

The opposite, however, seems to be just fine for the folks at the University of Nebraska-Lincoln.

Donald Trump will be in Lincoln later this month, and the event is strictly BYOB.

Bring your own bat.

A group of Hispanic students is making The Donald the centerpiece of a fundraiser on the afternoon of Sept. 16 on the University of Nebraska-Lincoln campus. Eat free food and buy a T-shirt, the students say.

And while you’re there, take a cathartic swing at a candy-filled Trump piñata — wearing a business suit and sporting that wispy hair — in honor of Hispanic heritage.[More]

According to the World-Herald, this event was planned by the UNL chapter of the "Society of Hispanic Professional Engineers", and OKed by their board advisor, a graduate student named Francisco Mora. They have since cancelled the event, without much in the way of apology.

One wonders if a white person could start a Society of White/Caucasian Professional Engineers? The daily news continues to look more and more like it came from the Twilight Zone.

This should all come as no surprise to anyone who's been paying attention to what's been going on in the United States for the last fifty years.