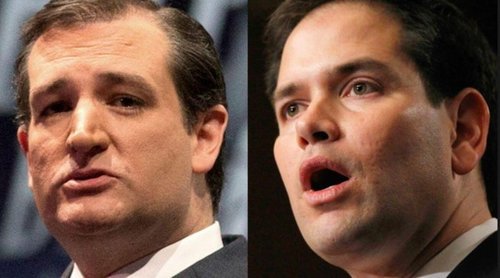 A Reader Reminds Us Not To Trust Ted Cruz

From: An Alert Reader [Email him]

I found it amusing that a Cruz insider relayed to Kirkpatrick his willingness to "stab his donors in the back" to achieve personal advancement, particularly when coupled with the descriptive "sociopathic calculation;" I personally believe Ted Cruz would push his own mother in front of a subway if he thought that would get him elected  I've always considered him one of the more obvious Beltway sociopaths, one whose intellect and glibness present a particular danger to the rest of us, namely that he will successfully  manipulate his way into a position of real power by telling the people what he thinks they want to hear, then reverse himself once in office, as needed, to pay back the donors and whoever else he thinks he needs in the future.

I think he believes he is smart enough to get away with it, too, or rather, thinks he can gull the rubes when the time comes by passing off their betrayal as an act of love ("Reaganite" Conservatism?).   Oh, he might secure the border, because that's easy to do and makes for good photo ops, but he'd turn around and remove all visa caps having the slightest connection to employment, giving the plutocrats what they really want (globalized labor and wages driven down to nothing) while posing as a patriot.

Cruz has been mouthing donor class open borders platitudes his entire career ("“There is no stronger advocate for legal immigration in the U.S. Senate than I am”."   ""Every H-1B visa holder that comes in, he or she creates 1.7 jobs for Americans", "Legal good, illegal bad."

Unlike Rubio, he's too smart to actually believe that tripe.

He cannot be trusted.

Trump, on the other hand, can be relied on, absolutely, to continue being Trump and do whatever he said he was going to do, for good or bad.

Further, I believe Trump cares about America and the American people and wants the best for them, rather like Netanyahu and the Israelis.  Cruz cares about Cruz and Cruz getting elected.  If he had to chop all of us for parts and sell them to the Chinese to do it, he would.