I'm a bit surprised that Derb, a guy who always seems to have his thumb on the pulse of things Chinese and Chinese-American, failed to mention the obvious about Elmhurst and Queens more generally. Both have a huge and fairly recently planted Chinese community. From Wikipedia’s entry on Elmhurst: 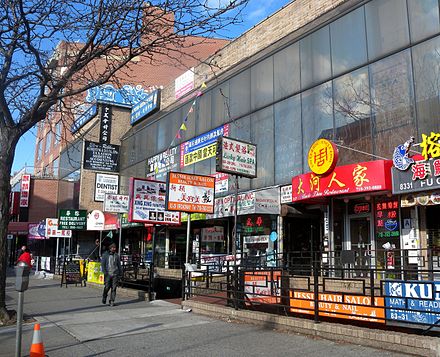 Elmhurst's Chinatown (唐人街, 艾浒) on Broadway is a satellite of the Flushing Chinatown.

Elmhurst's rapidly growing Chinatown (艾浒 唐人街)[22] is the second largest in Queens, the other Chinatown being located in Flushing. Previously a small area with Chinese shops on Broadway between 81st Street and Cornish Avenue, this newly evolved second Chinatown in Queens has now expanded to 45th Avenue and Whitney Avenue and is developing as a satellite of the Flushing Chinatown. It is the second largest Chinese enclave in Queens, behind Flushing.[13]

In Chinese translation, Elmhurst is named 艾浒 (Àihǔ in Standard Chinese). There are also many other Southeast Asian businesses and shops in the area, including Malaysian Chinese, Singaporean Chinese, Indonesian, Thai, and Vietnamese. Hong Kong Supermarket and New York Supermarket serve as the largest Chinese supermarkets selling different food varieties to the Elmhurst Chinatown.[23][24] The Asia Bank serves as the only Chinese bank and the main financial resource business for the growing enclave,[25] though HSBC, Chase, and other banks also are located in Elmhurst along Broadway. Like Flushing's Chinatown, it is also very highly populated by Mandarin speakers, although many also speak other varieties of Chinese.

Since the 2000s, Elmhurst Chinatown has expanded to the neighborhood of Corona, Queens.[26]

That last line is a bit of irony, no?

John Derbyshire writes: I didn't know that. My wife and I actually lived in Elmhurst for 6 months, 1991-92. It wasn't very Chinese then—there were Chinese people (including our landlord) but a lot more South Americans. Flushing & Jackson Heights were way more Chinese.