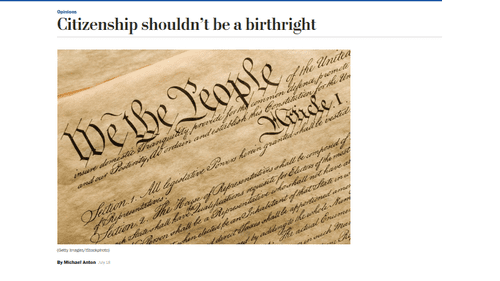 From: A Paleocon Reader [Email him]

Recently we have been living through a time of hysteria raised to a fever pitch, but a recent Op-Ed by Michael Anton [Citizenship Should Not Be A Birthright, Washington Post, July 18, 2018] seems to have taken the dental drill right to the neocon's unsedated nerve endings. America-hating Open Borders zealot John Podhoretz called Mr. Anton "unspeakable" and said that he too would be against birthright citizenship if he could revoke Mr. Anton's.

Now Michael Anton is against birthright citizenship. So am I. If it meant revoking his.

Naval War College professor and permanent fixture on the high horse Tom Nichols called Mr. Anton a "disgrace" and then piled on by calling Mr. Anton's legendary Flight 93 essay a "majestic display of pseudo-intellectual bulls--t by a pseudo-intellectual poseur". And finally, arch war-monger Bill Kristol objected to the piece by saying that "no one hates actual historical and existing U.S. more than Trump intellectuals". This last bit about Trump ideologists hating historical America is a bit rich given that Mr. Kristol and the other two wouldn't know the real thing if it bit them and would do away with it at the drop of a hat if they could.

Now it's true that Mr. Anton argues that President Trump has the power to end birthright citizenship by Presidential fiat, and to a degree this is what the three object to. But a disagreement over a technical constitutional question would never arouse this kind of drooling ire. No, what elicits this kind of crazy is spelled out by Tufts Law Professor Daniel Drezner [Email him] who Mr. Nichols retweets approvingly.

Prof. Drezner of Tufts' Fletcher School of Law and Diplomacy civilly contributes to the debate over the 14th Amendment & jus soli by channeling his inner Samuel L. Jackson for us. As @eladsinned says, we should call Prof. Drezner something he'd think hip-hopper, such as Dr. Drez. https://t.co/ek96SIghGj

So there it is for all to see—to the Proposition Nation “export liberal democracy” crowd any defense of our borders and any defense of the true historical America is nothing more than an atavistic upsurge of vile nativism and rampant white supremacy.  And if combating that horror means conferring the most valuable designation on the planet on everyone and anyone merely because their mother violated federal law and happened to drop them on our native soil—then so be it