A Reader Is Back On The Trump Train—How Can WE Be Disloyal When There's So Much Treason?

Re: Ann Coulter's article  Every Time I Try To Be Mad At Trump, The Media Pulls Me Back 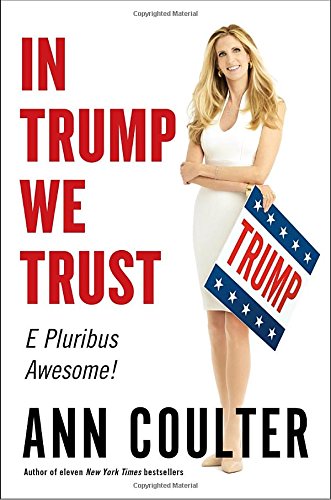 I was listening to Jared Taylor's interview with Sara Snider at CNN yesterday and heard him echo the same frustrations I have with Trump. [YouTube] However, I couldn't shake the feeling there was something off about our complaints.  Not the complaints themselves, but being so vocal with our frustrations.  This thing with Seth Rich, Comey, and the impeachment talk has made it clear for me: there are more pressing concerns.

We're fighting a long-term war for our civilization but there is a battle that must be won right now.  We are quite literally the revolution, trying to reclaim our country and our government from the usurpers.  For better or worse, Trump is our champion and they absolutely cannot be allowed to take him down.

I understand the problems with DACA, bad appointments, migrants, the wall, the Middle East, etc., and I feel very strongly about those things.  I also understand that Trump has not done things, such as rescinding DACA, that would strengthen the base support he so desperately needs right now.

But he is an amateur and foolish in some matters and much of this should have been expected.  Trump obviously underestimated the extent to which the establishment snakes hate him and would do whatever they could behind the scenes to take him down.

There will be a time for reconciling the unfulfilled promises.  There will be time for nailing him to the Wall (pardon the pun).  But not yet.  So I'm putting on hold my detached, told-ya-so snark and I'm back on the Trump Train for the time being.  We put him in office and if anyone is going to take him down, it should be us, not these sniveling traitors.  Now where's my MAGA hat? 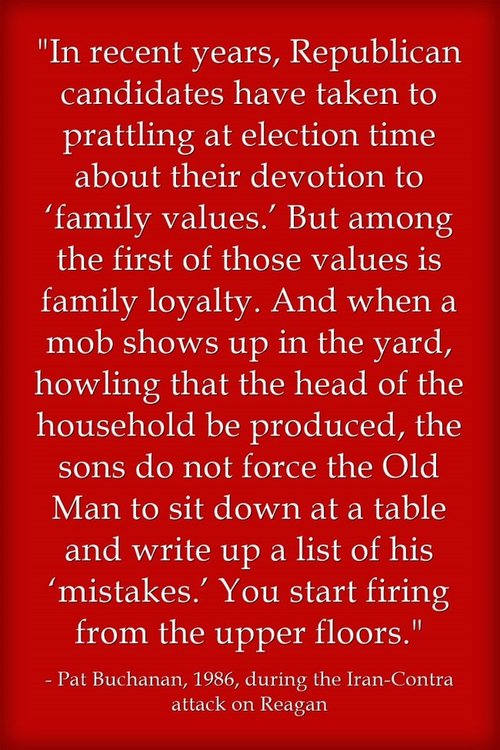 James Fulford writes: The situation reminds me of something that Pat Buchanan wrote (addressed to cowardly Congressional Republicans) during the Iran-Contra attack on Reagan.

"In recent years, Republican candidates have taken to prattling at election time about their devotion to "family values." But among the first of those values is family loyalty. And when a mob shows up in the yard, howling that the head of the household be produced, the sons do not force the Old Man to sit down at a table and write up a list of his "mistakes." You start firing from the upper floors."

I’ve made it into the pullquote graphic at right, and its source is No One Gave the Order To Abandon Reagan's Ship, By Patrick J. Buchanan, Washington Post,  December 8, 1986