From: An Anonymous Gun-Owner [Email him]

I am not sure that the primary cause of the wounded/kill ratio of the "leaded law" being what it is due to bad black marksmanship.  I suspect that it is due more to black shooters using full metal jacket bullets, rather than the more deadly hollow points.

Full metal jacket cartridges are cheaper, and unless you know better than to use them for target shooting only, they are not as deadly.  I doubt folks go out and plan on just wounding someone.

I base this admitted conjecture on the data from heyjackass.com which shows shot placement data of the killed and wounded at this link. 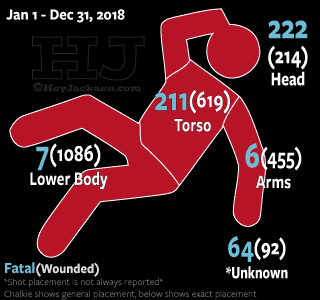 Granted, there is a bit of missing data for those only wounded, but I'm seeing that the majority of people those killed are hit in the head, and many of the wounded are hit in the chest, back, and abdomen.

James Fulford writes: It's a theory, and makes the point that most black criminals are not part of what's called "Gun Culture 2.0" or even "Gun Culture 1.0" so they don't know what kind of ammunition is in their gun.

However, it's frequently said that modern hollow-point ammunition is more effective in stopping people, but less fatal than military surplus full metal jacketed bullets. Specifically, with modern medical care, you're better off with a bullet that stops in your body and is fished out by surgeons, than one that goes right through your torso, creating two holes and what's called "pneumothorax." In fact, I've said this myself. See Surprise! The Treason Lobby Opposes Hollow-Point Bullets on the Border.

The reader is correct that urban black criminals—forbidden to own guns by both local ordinances and, because of felony convictions, Federal law—have bad guns and bad ammunition, which make them less effective. (In actual gunfights with police, they generally lose.) What they have even more of, though, is bad marksmanship. See my original article The “Leaded Law” And Mass Shootings—Poor Black Marksmanship Is Saving Lives.