KOMO News in Seattle has a report that says

Authorities have arrested one suspect and are searching for two others after Wednesday's shootout in downtown Seattle that left one woman dead and injured seven other victims amid a trail of blood and bullets, Seattle police say.

Both of the suspects still at large are 24 years old and have lengthy criminal records. They are considered armed and dangerous.

These are the two suspects:

3RD AND PINE UPDATE: Detectives have identified two suspects in yesterday's shooting. Marquise Latrelle Tolbert (age 24, 6'1" 200 lbs) and William Ray Tolliver (age 24, 6'0" 145 lbs). Both men are considered armed and dangerous. Call 911 if you see them or know where they are. pic.twitter.com/vgg7Uez3zN

Note that the written description doesn't say they're black. If you're on Twitter and see their pictures, you know they're black, but if you heard that description read over the radio...you'd probably assume they were black, because you're a VDARE.com reader.

The general public is often fooled, though.

One at-large suspect, identified as Marquise Tolbert, has 21 arrests, three felony convictions and 12 gross misdemeanor convictions, according to public records.

The suspect under arrest was injured during the shootout and was initially taken to Harborview Medical Center for treatment. He is now booked into the King County Jail. No other information was immediately available about him.

A woman about 50 years of age was killed in the shooting shortly after 5 p.m. Wednesday near the McDonald's at 3rd Avenue and Pine Street, said Seattle Fire Chief Harold Scoggins. Seven others were hurt, including a 9-year-old boy. It was the second shooting in the heart of downtown Seattle's retail center in about 24 hours.

Here's a Google Street View of that McDonald's during the day:

What we call the "Leaded Law," proposed by a blogger called Ben Kurtz, is that if you hear that a mass shooting has a large number of wounded, and a small number of killed, then the shooters were probably black, because blacks can't shoot very well.

Kurtz put it this way:

That seems to be what happened here.

"This was not a random incident," she said, adding that officers arrived on the scene shortly after they received reports of gunfire. She said the victims were found along a one-and-a-half-block area.

This is not good marksmanship. The shooters were not trying to shoot the woman who died, the 9-year-old wounded, or most of the other wounded. They were, according to Chief Best, trying to shoot each other... and two of them walked away.

I suggested a number of possible reasons for this bad marksmanship in my first "Leaded Law" article (read the whole thing) but I want to add one more clue, when the MSM is being "coy" about race.

If there are two or more suspects, they're more likely to be black gangsters. In a recent post about the per capita black/white murder offender ratio, Steve Sailer said that

The Club Blu shootings in Fort Myers were committed (allegedly) these guys below. 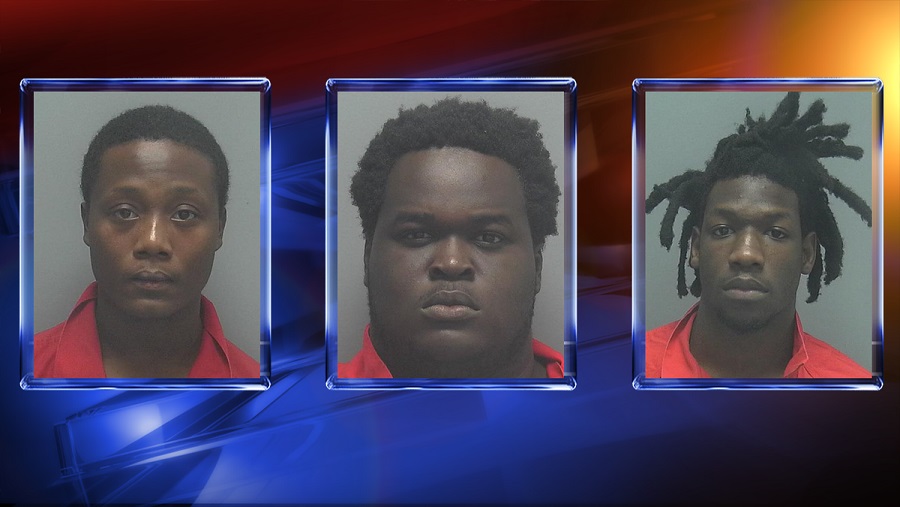 White and Asian mass shooters do not live in a world where they have buddies who want to help them shoot people.