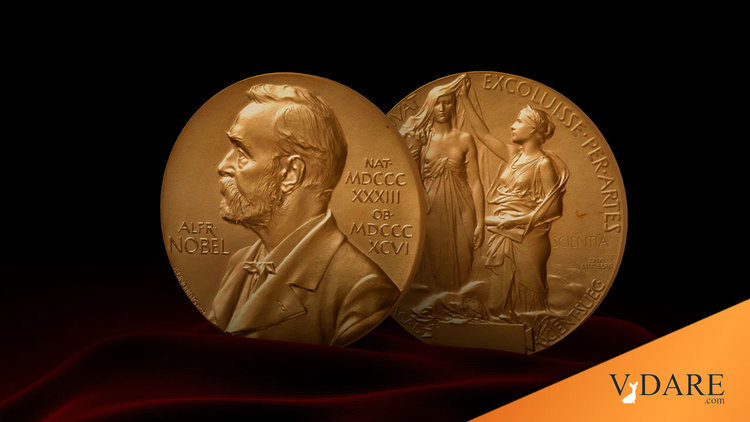 From: A Pennsylvania Reader [Email her]

The Nobel Economic Laureate James M. Buchanan recently died at 93—so I spent some time today reviewing some of his work.

One aspect caught my eye vis-a-vis VDARE.com, because it beautifully explains why anyone interested in a classical liberal society, and even a modern liberal welfare state, cannot possibly support open borders and mass immigration—and that there is a reason that these political tendancies have spontaneously appeared in certain places in the world and not in others.

This is from a description by University of Georgia Professor Dwight R. Lee of Buchanan's Why I, Too, Am Not a Conservative: The Normative Vision of Classical Liberalism The emphases are mine:

This standard position holds that to improve the social order, we must improve the social institutions (and the incentives they embody) rather than try to improve people. Although Buchanan rejects romantic notions of how the world would be a better place if only people quit acting like people, he argues that the behavior of a significant number has to satisfy certain minimum standards for a classical-liberal order to survive. These standards include the willingness and fitness to take on the responsibility of freedom; obedience to the prevailing rules of just conduct in dealing with others; attainment of a reasonable understanding and acceptance of how the world works; and willingness to defend the liberal order by distinguishing between those who do and do not deserve to be treated as members of that order.

In chapters 3 and 4, Buchanan continues with a discussion of the importance of people’s accepting a large measure of responsibility and treating each other with respect and reciprocity. He argues that a liberal order can be sustained only by regarding dependency and opportunism as clear violations of acceptable social norms. In chapter 4, he discusses the social norms of respect and reciprocity as part of the broad institutional framework of liberalism; they are public goods, but they are not as easily provided as standard public goods, such as national defense or mosquito control.

Or, as another blogger puts it, “diversity is chaos.”

Peter Brimelow writes: Buchanan's Nobel was for his work developing Public Choice theory, the argument that government is a self-interested actor in the economy and that "government failure" is at least as much a reality as "Market Failure." Current immigration policy, which imports constituencies for more government action, is certainly an example. Many observers believed the Nobel should have been shared with Buchanan's long-time colleague Gordon Tullock. We reposted my 1997 interview with Tullock here.