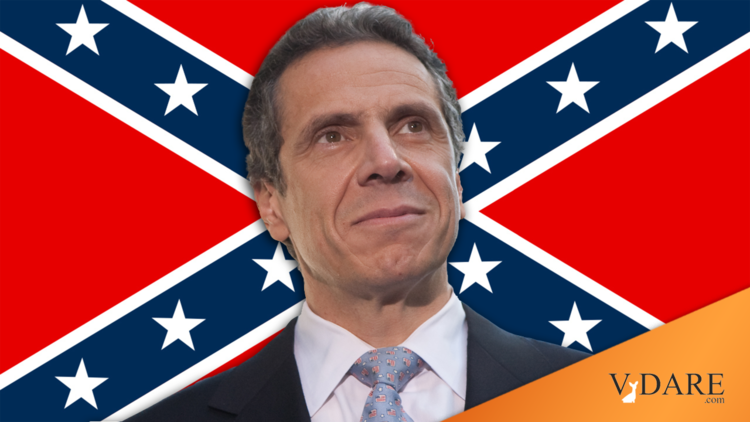 I just saw that Governor Andrew Cuomo signed a bill that banned the sale and display of the Confederate Battle Flag. Being that he, his brother, and his father all went to law school, I figured that there had to be more to the story. He should certainly know better, especially if he might end up being Attorney General of the United States. The bill is slightly narrower in scope than I was initially led to believe. It limits the Battle Flag's sale and display on state property, which would also include things like state fairs. Even that narrowing, however, will not pass Constitutional muster. The Government of New York has a positive duty to protect the First Amendment rights of its citizens pursuant to the mandates of the Fourteenth Amendment. If someone sets up a booth at a New York State fair, they have an absolute right to fly the Battle Flag.

While I understand that he did this to curry favor with the radicals of his Party, he probably did not do New York any favors. Someone is eventually going to sue the State because of this law. That person is going to win—rather easily. New York is then very likely going to have to pay attorney fees to the litigant's lawyer. Those fees are often awarded in cases like this because the Government's actions infringed upon a "fundamental right." This happens a lot in abortion restriction cases. Since abortion is considered a "fundamental right" by the Courts, any litigation that is taken to strike down that "undue burden" is not imposed upon the winning side. The rationale is that a person should not have to pay money to enforce their own rights against the Government.

So, Governor Cuomo has signed a bill that is almost certainly going to cost the taxpayers of New York thousands of dollars. The biggest beneficiary of this law is going to be some trial lawyer trying to make a quick buck and a name for himself. If I were an advisor to Governor Cuomo I would be imploring him to veto this bill. In the long run, it is just going to make his political opponents wealthier and famous.

Personally, I do not really care all that much about the Confederate Battle Flag. My views on it are similar to Christmas Nativity scenes on public property. I am not going to expend a lot of effort to set one up, but I am disgusted by the people who oppose the displays. The opposition to the Confederate Battle Flag makes me an implicit ally to the people who still fly it, and I am hoping actions like Governor Cuomo's entice more people to start flying it in public. The Battle Flag was once the symbol of resistance to Reconstruction—maybe it can be popularized again for a new kind of resistance against BLM/Antifa radicalism.

James Fulford writes:  The so-called ban is much narrower than this headline would suggest.

What Cuomo is saying is that the State Of New York, on its own property, won't fly the flag, or sell it, or allow it to be flown. He seems to have forgotten the "public forum" First Amendment jurisprudence which protects American Renaissance conferences in Tennessee State Parks.