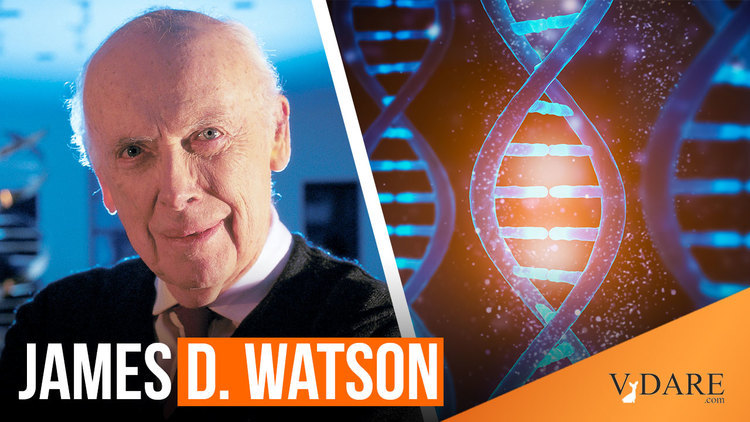 From: Wolfgang Zernik (e-mail him)

Re: Steve Sailer's Column: James D. Watson—Broken By The PC Inquisition, Betrayed By The Religious Right

As Sailer wrote in his 2002 column, the kind of persecution Watson is experiencing goes back almost thirty years.

In 1969 psychologist Arthur Jensen published an article in the Harvard Educational Review [PDF] showing the relation between IQ and race. The reaction was the same then as now—death threats, interference with lectures and classes, attempts to have him fired.

Sailer may be right that new genetic research may soon make the case indisputable.

However, the lack of scientific evidence has never been the issue.

The real problem Sailer should tackle is this: society has no way to treat the recognition that one racial group is intellectually inferior to others.

I mean simply no way to deal with it, legally, constitutionally or morally. We are not Nazis, after all, and are not likely to become like them. Why not discuss important issues?

If we ever get to the point where we are forced to acknowledge that people of African descent are on average far less intelligent than whites or Asians, what do we do then?

Zernik is a long-time friend of VDARE.COM. His previous columns and letters are here.

I don't want seem flippant, but this is the kind of question that sounds more important than it is. Human beings have a lot of practice coping with reality.

What we're not terribly good at is intellectualizing reality. So we get ourselves tied up in knots over mundane theoretical questions.

We deal with hereditary inequality all the time. Look at the National Football League, America's most popular spectator sport. Every time you turn on your TV on Sunday, your lying eyes tell you that the intellectual orthodoxy about every race being exactly the same is hooey.

According to the Caste Football website, at the beginning of the 2007 season, none of the 32 starting tailbacks and none of the 64 starting cornerbacks were white. Prejudice probably plays a role in why the figures for those positions are 0 out of 96 rather than, say, 5 or 10 out of 96. But clearly, there must be some genetic differences that make blacks better at those positions on average.

The NFL just goes on being vastly popular despite racial differences being so vividly illustrated in its games. People deal with it.

As I pointed out in VDARE.com in 2003, better intellects than mine have thought hard about the meaning of the phrase "All men are created equal."

The Catholic apologist and genius G.K. Chesterton wrote in 1922:

"The Declaration of Independence dogmatically bases all rights on the fact that God created all men equal; and it is right; for if they were not created equal, they were certainly evolved unequal. There is no basis for democracy except in a dogma about the divine origin of man." [What I Saw In America, Chapter 19]

Jefferson and the signers of the Declaration probably meant something similarly sophisticated.

Unfortunately, they didn't quite end up saying that.

The great computer scientist John McCarthy, the inventor of the LISP programming language for artificial intelligence, once told me that if Jefferson had asked him to debug the most famous sentence from the Declaration of Independence, he'd add the word "in" between "equal" and "that." Then it would read:

"We hold these truths to be self-evident, that all men are created equal, in that they are endowed by their Creator with certain unalienable Rights, that among these are Life, Liberty and the pursuit of Happiness."

"I think the authors of that notable instrument intended to include all men, but they did not intend to declare all men equal in all respects. They did not mean to say all were equal in color, size, intellect, moral developments, or social capacity. They defined with tolerable distinctness, in what respects they did consider all men created equal—equal in 'certain inalienable rights, among which are life, liberty, and the pursuit of happiness.'"

So let's not get ourselves all tangled up trying to interpret literally a phrase that Jefferson wrote during back-to-back all-nighters!