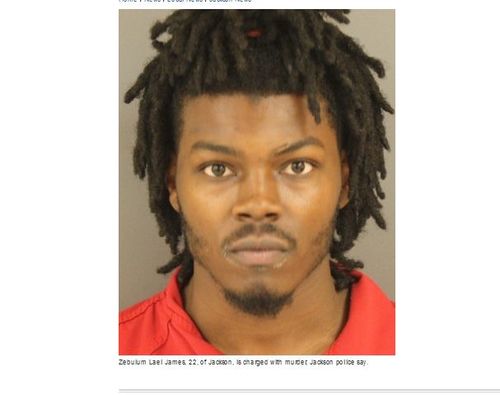 From: A Non-Random Mississippian [Email Him]

Since President Obama and Reverend Al Sharpton have not gotten around to bringing these two murders to the attention of the nation, I thought I would let you know. In two  random crimes committed by the same random criminal, two random victims lost their lives in Jackson, Mississippi, last Thursday night.

While you will find a photo here and there in the news articles (only five in Google News)covering this story, you will not find no explicit mention of the racial identity of the shooter or the victims. See the Clarion Ledger's article, as just one of many examples, here: JPD: Women Killed in Random Shootings. By Sarah Fowler and Anna Wolfe, November 20, 2015.

Now I will explain what actually happened, as you won't find the story anywhere else. The headline should be

A black man, 22 year old  Zebulum Lael James, shot two white women on Thursday evening in Jackson, Mississippi. The black criminal's first white female victim was Suzanne Hogan, formerly of New York. James shot Hogan in the head while she was pumping gas at a gas station. James then continued across town to a restaurant parking lot, where he saw Kristy Lynn Mitchell, a business traveler from Missouri, walking from her next-door hotel to the restaurant. James stuck his gun out the window, and fired into her abdomen, leaving her for dead. James also hit another man on the way out of the parking lot.

One of the white victims, Kristy Lynn Mitchell, was from Missouri. Here is an article in a Kansas City newspaper, where you will not any description or even a picture of the "random" criminal who ended her life: Excelsior Springs woman shot and killed in Mississippi in 'senseless act', By Glenn E. Rice, Kansas City Star, November 2, 2015.

Apparently James is a civil engineering major at the prestigious “historically black” Jackson State University. Not a word has been mentioned locally in the press or by the authorities investigating these crimes against white women as hate crimes.

While Mississippi does have hate crime statues, the only cases that I am aware of where they have been used is to really put the screws to white people, never for blacks, even when it's pretty obvious the crimes were motivated by hate.

See the story of a former Marine Iraq War Veteran who was beaten at a restaurant shortly after the Mike Brown debacle here.