Pew's rectangle is actually quite deceptive. It makes it look like the white population is shrinking when it has held steady (as has the black) and even grown a bit. What's needed is a trapezoid— and a mighty steep one at that. The right edge is Jack's beanstalk. 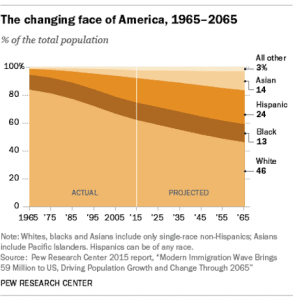 President Clinton, when announcing his Portland Plan in 1999, told us there would be no majority race in America "in a little more than 50 years." Counting from 1999.

Let's do the arithmetic. The present majority race, inclusive of Hispanics (got something against inclusion?), is 246 million. To reach Clinton's goal, the total population would have to exceed 492 million.

Does half a billion sound alarmist? Since that speech seventeen springs ago, we have added 43 million to our census rolls. From the start of Clinton's first term to the end of Obama's second, six terms in all, it will be 64 million.

At that rate, we will have 388 million after the next six presidential terms, and 452 million at the end of the next six—that's 2065, the final year of the Pew forecast.

Look at it this way: there are seven acres for every American. When today's Cub Scout is in the Oval Office, there will be four and a half, and shrinking.

This is what the Democratic party has been doing to us, what the Republicans have shown little inclination to stop, or to slow, or even to ask if we approve.

As with everything Clinton, there is the unaddressed matter of consent.