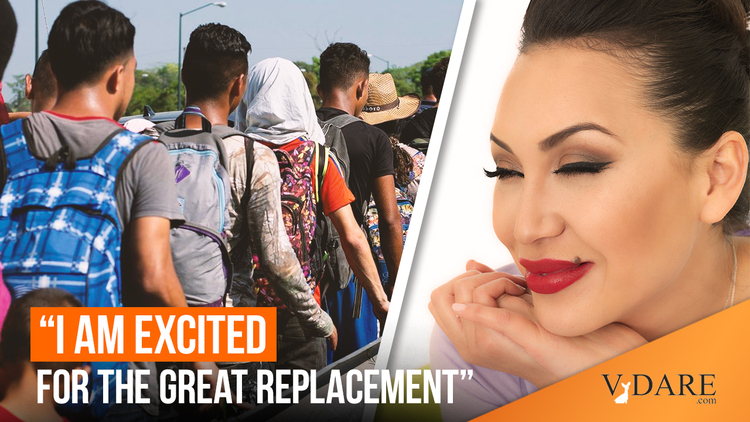 Re: WASHINGTON POST’S Ellie Silverman Is Coming For VDARE.com (And Christmas)

From: Treeza Fernandez [Email her]

I hope Peter Brimelow lives to be at least 98 years of age—that will occur in 2045.

Amazingly, 2045 is also the year Caucasians are predicted to become a minority in the United States.

Caucasians are already a minority globally.  Live with the knowledge that your children and grandchildren will not hold the same status they feel they are accustomed to just by the mere fact of the color of their skin.  Live with the knowledge that one day the castle you own will one day be owned by People of Color. You will probably twist and turn, but one thing you cannot do is change the inevitable.

It’s a year I look forward to with great anticipation.

James Fulford writes: If didn’t know better, I’d think the reader was a believer in the "Great Replacement," which we’re told over and over is a "racist conspiracy theory.” And as the writer points out, this affects the next generation. VDARE.com editor Peter Brimelow wrote in Alien Nation (1995) that

Deep into the twenty-first century, well into the lifetime of my little son, American patriots will be fighting to salvage as much as possible from the shipwreck of their great Republic....

And the politicians and pundits who allowed this to happen truly deserve, and will certainly receive...the curses of those who come after.

But of course, the thing about demographic inevitabilities is that they’re not inevitable. The "Browning of America" will only continue if there is no immigration moratorium, and no reduction, by deportation or attrition, of the current illegal population.

Could such a thing happen? Well, yes. A man who ran on that kind of policy won the Presidency in 2016. You may have heard of it.