ESPN has done a study of college athletics and crime, finding ten top universities guilty of widespread corruption based upon preferential treatment of star athletes.[Lawyers, status, public backlash aid college athletes accused of crimes, June 15, 2015] The corruption at some institutions was systemic and involved collaboration among police, administration, and athletic departments who often used powerful lawyers to protect their treasured jocks. The fact that these athletes were black flowed like water off a duck’s back as ESPN never mentions race.

Paula Lavigne, the lead reporter, is a brainy woman with a color blind eye but sharp crime detecting skills. In her study two Florida universities led the parade of criminality. First, Tim Tebow’s Florida University had the most athletes doing crime between 2009 and 2014, a total of 80 involved in over 100 crimes. This may or may not have included the notorious Aaron Hernandez., [Judge rejects Aaron Hernandez move to toss murder conviction,  Fox News, July 1, 2015]who apparently benefited little from Bible studies with Tebow.

Secondly, Florida State, renowned for corruption, had 66 athletes in crimes but 70% of those cases were never prosecuted. FSU further enhanced its reputation for enabling crime by allowing Jameis Winston, a Heisman Trophy winner, to escape after a charge of rape was lodged against him in 2012. I discussed the notorious Winston in a prior letter.

The Outside The Line team found that the failure to prosecute was a paralysis resulting from a systematic collaboration that was fundamentally dishonest and deprived victims, usually white female students, of their constitutional rights. The favored group were not the upper-class Duke Lacrosse players—they were the same blacks who the MSM daily remind us are treated badly by “racist America.” If Lavigne is right, then what do we call preferential treatment like easy degrees, free rapes, and money under the table from wealthy alumni? Punishment for criminal behavior at UF and FSU simply did not exist. Lavigne found her moral backbone by asking a criminal athlete named Chris Rainey 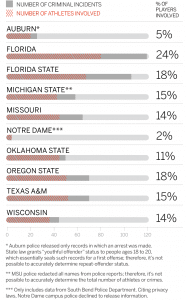 if he thought the absence of punishment made him worse, meaning more likely to persist in criminality because no-one said “NO.” Rainey pondered that weighty question and gave a hesitant response in the affirmative.

Lavigne gave little thought to the tremendous miscarriage of justice staring us in the face. While punishment might have that kind of salutary effect, the whole notion of justice is damaged by the absence of appropriate punishment. Men of 20 or 21—even student athletes—know that rape is illegal and considered a felony. A student willing to rob, hurt, or rape other students must be treated like any other criminal.

ESPN at least exposed the ugly truth about the corruption of college life by sports fanaticism and loads of money. Intercollegiate sports are now deeply corrupt and the uneducated pawns are black males with above average athleticism but no aptitude for academics.

That real thugs make tough, nasty, athletes is well-known. The fact that colleges now pander to such “diverse elements” is tragic because sports are corrupting what was always a part of life that is memorable for learning and youthful camaraderie.

To share thoughts with great minds was an experience never to be forgotten. The politically correct ESPN team broke new ground by finding institutional corruption at the root of college sports dysfunction.

But it never occurred to them that many of these criminals shouldn't have been in college at all.