A Concerned Reader Is Unconcerned About Charlie Rangel's Primary Troubles 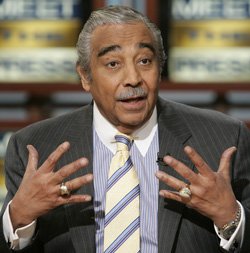 Rangel on Primary Opponent: 'What the Heck Has He Done Besides Saying He’s a Dominican?'

In his first televised debate with primary challenger Adriano Espaillat, Rep. Charles B. Rangel, D-N.Y., snapped at the state senator who if elected could become the first Dominican-American in Congress, saying, “Just what the heck has he done besides saying he’s a Dominican?” Rangel is seeking his 23rd term in the House of Representatives. Rollcall, June 21, 2014

This is another example of Hispanic Hype. [VDARE.com note: Immigration or no immigration, Rangel will stay in office until actually convicted of something and imprisoned—the district he represents is Harlem.] But this is buried in the stories because Rangel is so liberal and not the most upstanding member of Congress.[Nancy Pelosi And The Black Caucus—The Enablers of Charlie Rangel, By Michelle Malkin on July 29, 2010]