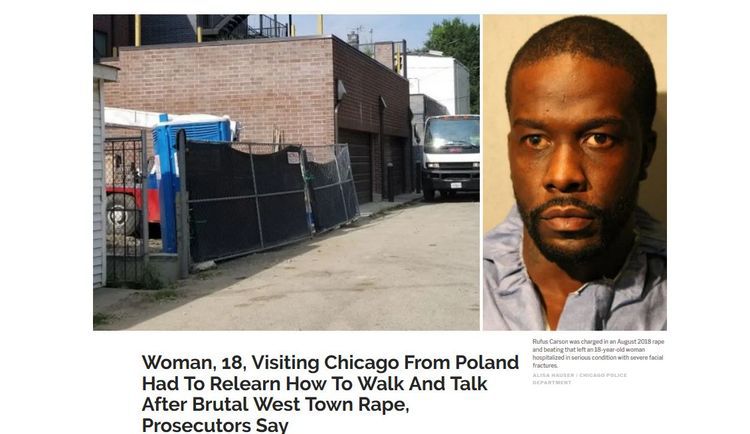 A Reader in Chicago [Email him]

From earlier this month, a story that might be worth bringing to the attention of your readers and that as far as I can tell has thus far received no attention in the national press (I learned of it from a French news aggregator). The story has an immigrant angle but is mainly another case of the more abject variety of black-on-white crime. See here:

Woman, 18, Visiting Chicago From Poland Had To Relearn How To Walk And Talk After Brutal West Town Rape, Prosecutors Say

Rufus Carson, 38, charged in the West Town rape, rejected a 30-year plea deal Tuesday and could face 150 years in prison if the case goes to trial.

If I bring it to your attention, it is mainly because a GoFundMe page has been established here to assist the victim and her family with travel expenses should they be willing to attend the trial. One gathers that the perp’s lawyer has advised him to refuse a (generous) plea deal on the grounds that this young woman is unlikely to have the resources or courage to testify at trial…

James Fulford writes: The only reason we know that this is a black-on-white rape case is that the victim is from Poland, where everyone is white. The traditional protection of anonymity accorded to rape victims means that we generally don't know if rape victims are white or black. All the more reason for reporters, and for that matter police officers,  who do know the races involved, to say so.